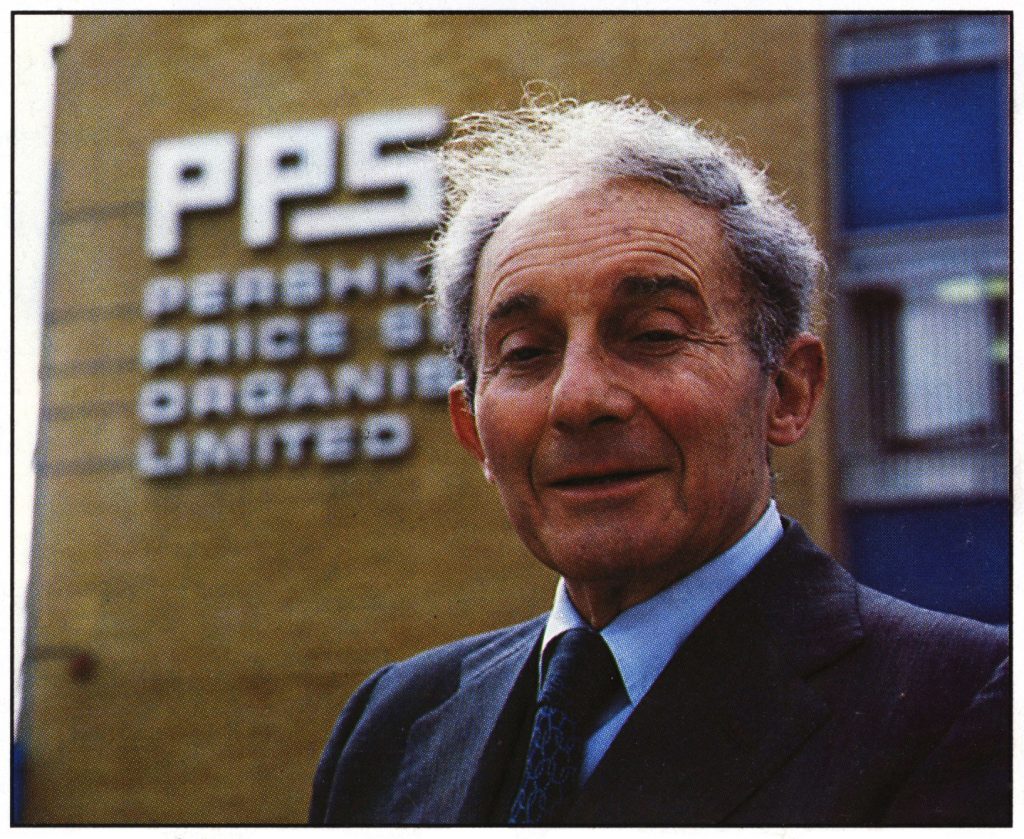 On a rainy, cold January morning in 1985, I spied a short man wearing a three-quarter dark grey overcoat and clutching a plastic shopping bag in England’s Gateshead printing plant of Her Majesty’s Stationary Office. I was inspecting a machine that was on sale. I recognized him immediately as Eric Tanzer, the legendary director of the United Kingdom’s largest graphic arts machinery distributor, the Pershke-Price Service Organization.

For decades it was impossible to find anyone in the UK printing scene who didn’t know Eric. I knew him through my father, as Eric’s brother Siegfried once employed my dad in Montreal. On that aforementioned morning, I missed the chance to speak with him. Luckily, a few hours later we both found ourselves at the Newcastle airport departure lounge waiting to board a flight to London. I took the opportunity to introduce myself and have a chat. We talked about his brother, my father, whom he fondly remembered, and a myriad of other topics lost to memory. Tanzer was warm, kind and sincere.

In the presence of a legend

Like many European Jews who were born in the 20th century, Eric led a tumultuous life. He was born in Budapest in 1906, in what was then the Austro-Hungarian Empire. Eric learned the printing equipment business through his family’s distributorship firm, Globus, which then represented many printing equipment including the famous German Rockstroh Victoria art platen.

Eric immigrated to England in 1931 where he met Pierre Bausch, a Luxembourg businessman. Eric was immediately offered a job as a salesman in the newly incorporated Price Service & Co., which was financially associated with another machine dealer, Frank F. Pershke. Pershke’s fledgling business, which dates to 1908, also represented the Victoria platen. Although Pershke’s name was on the door, a good portion of the ownership was held by Pierre Bausch. In 1934, Eric married Bausch’s daughter.

Life in England at least meant some of the horrors beginning to take place in Hungary was at a distance. Both businesses sputtered along through the depression years until the end of WW II. In March 1947, BUGRA, Germany’s first post-war print expo, was held in Leipzig.

Faber & Schleicher AG had taken space at BUGRA. They are one of the world’s oldest offset press manufacturers, eclipsed only by Harris-Seybold-Potter in the USA, and George Mann & Co. Ltd. in England. Their brand, “Roland,” is still used today. The first rotary sheetfed offset would leave their Offenbach factory in 1911, quickly followed up by more advanced designs in one, two, and, by 1950, a four-colour “Ultra” version. The five-cylinder design was unique. A module (often referred to as a “machine”) would incorporate a user-friendly upper and lower printing unit while printing on one common-impression cylinder. The resulting design would become a worldwide favourite of both presspersons and owners. However, in 1947, Roland was struggling to rebuild along with other German firms.

A deal was struck at BUGRA that would last an amazing 55 years, ending with Man Roland Germany taking over the UK agency. Perhaps, and it’s just conjecture, Eric may have considered the Planeta range of presses. However, in the mid-1930s, Planeta had agreed to license two of its designs, the “Quinta” and “Tertia” to George Mann & Co. Mann had been selling their “Fast Three” and Fast Five” versions of the Planeta all over the UK and British Empire, and Eric would have known that importing German-built originals would end in court. Besides, at the end of the war, the Planeta factories were stripped of machine-tools as reparations to the Soviets. Many East German firms had faced similar fates, which gave West Germans, such as Roland, a distinct advantage.

The letterhead of Price Service in early 1950s.

The union between Roland and Tanzer

As excited as the two men were to win a major dealership, they soon found a British import license was needed. Surprisingly, it would take four years to get one, and in 1951, the same year as the first Drupa trade show, Roland presses started to pour into Britain. The first sale was made to Ben Johnson Limited of York. Britain wasn’t thrilled with anything made in Germany so soon after the war, and it’s a credit to Eric that he was able to successfully compete with British makers such as Crabtree and Mann.

In 1951, the American “Miehle” company caught wind of the happenings in the UK and jumped at the chance to work a similar deal with Roland. The Miehle/Roland relationship would last 39 years.

The results of the United Kingdom’s success with Rolands reached as far as East Asia. The models “Favorit,” “Parva,” “Rekord,” and “Ultra” were best-sellers globally.

I doubt early acceptance of the Roland would have been as dramatic without Eric. Britain’s love affair with Roland offsets made other regions take notice and catapulted Roland into the premier position, if not the top-selling rank over the next 40 years. As many have mentioned, Eric met the right press manufacturer at exactly the right time.

Eric loved to entertain customers at the symphony or opera, but never in a nightclub. He jogged regularly, was fluent in many languages, and, ultimately, changed the way graphic arts equipment was sold. It was said that after his retirement in 1992, some loyal customers insisted on only dealing with “ET.”

I was fortunate to catch up with Eric again in the early 1990s. Eric, in his eighties, still spoke in a soothing voice. His unmistakable kindness along with an amazing ability to remember intricate details of each customer solidified his place in the global printing industry.

Eric died in 1996 at the age of 89. He was an outstanding human being and printing equipment salesman, and, above all, a true gentleman.

This article originally appeared in the December 2021 issue of PrintAction.