Choosing the perfect equipment often comes down to personal preference 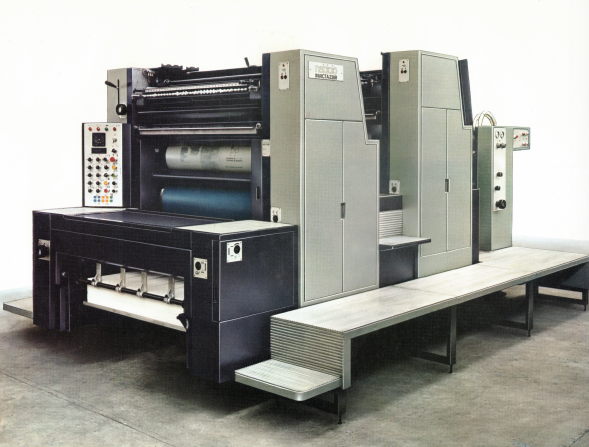 A Nebiolo press, circa 1978, which looked quite modern for its day and age. Photo: Nick Howard.

For well over 40 years, I have only used one brand of paint spray gun. Sure, I did drift once and tried a Binks, but I always returned to my DeVilbiss JGA. It so happens I still have that original gun. I love my DeVilbiss. Why, you may wonder? I don’t have an entirely rational reason other than during thick and thin, with some jobs being more than challenging, my JGA has never let me down. Today there are dozens of probably fantastic paint spray guns, which, when used correctly, can apply coatings from base primers to seal coats, but I have no plans to change. Everything from air dry oil-base enamels to lacquers and base primers has run through my JGA, and I take excellent care of it, carefully cleaning it after each use. This DeVilbiss is part of who I am.

Since 1820, a few years after American George Clymer had finally invented the first “all iron” printing press, without a “wine screw,” he found himself in a dog fight with Englishman Richard Cope and his all English “Albion” design. For the next 25 years, Clymer’s Columbian and Cope’s Albion would battle it out for a printer’s favour. So began the argument of who makes the best printing press.

As with my DeVilbiss JGA, I bonded with a tool that seemed never to let me down even though there are similar arguments amongst the trade favouring other brands. Humans act like this, bringing preferences and bias to play. We don’t have far to look for it, either. Polarizing politics, now entirely on display in the United States, is full of often ridiculous drum-beating for one party or another. Facts rarely play a role. Often gut instinct prejudices our ability to reason and access correctly.

Today’s printing machines are truly amazing. Nobody makes an awful press, digital or offset. Some are more user friendly, while others have features only they can offer. However, every press can produce a high-quality saleable print. Twenty-five years ago, offset press manufacturers started to take waste seriously. This period was well after a milestone of press innovations, including plate loading and preset functions, which appeared around 1992.

The year 1998 brought new trends such as inker response times and getting up to colour in less time. One particular manufacturer drastically reduced the number of rollers in their newly designed inker. Fewer rollers provided a faster reaction, except that’s not quite how it ended up. Severe ghosting was an unfortunate result. Back to the drawing board they went, to correct the flaw, but not before word spread throughout the industry. Someone once said that a lie gets halfway around the world before the truth can get its pants on. How true, and yet how unfortunate. Most likely spurred by competitive salesmen, design missteps such as this are the elixir of the competition in the hope customers will form negative opinions. Potential prospects were treated to an off-the-cuff remark from a competing salesman, and it had a negative effect, though the design issue was solved in a very short time.

During the summer of 1995, a battle was in full swing to win a crucial order from a large packaging printer in North Carolina. As is often the case, the various press manufacturers were whittled down to only two. One of them was manroland. I knew the salesperson for the competing press quite well, and he had worked hard to win this order. Demonstrations and press trials all went well, and there seemed no potholes on the road to victory. Then he got the call to come in. He was ensconced in a chair in the company board room when the CEO gave the salesperson the bad news: manroland was winning the order.

Great news obviously for manroland, but utter dejection for the competing salesperson. When pushed, the CEO could not come up with one technical issue that moved the needle. All the CEO said was both presses performed well – there were no real differences noted. However, one thing swayed the decision: “That manroland sure looked damn good.”

In the mid-1990s, manroland certainly had the sleekest and most technologically advanced press in the 700. The press stood out just in appearance. Under the covers, the 700 was bursting with all sorts of futuristic technology as well. This CEO felt he was buying the future, which, in fact, he was. Looks alone will not drive sales, though. If it did, Nebiolo would still be in business. What Nebiolo could do with metal covers and the Italian flair for style was so amazing, someone should have written a book called One Hundred and One Things You Can Do with Sheet Metal.

A good friend told me a story about how he started his print shop. Looking to purchase some machines, he called a local rep of one of the most prestigious manufacturers. Describing the type of work he wanted to produce, the salesperson, looking disinterested, gave him some unsolicited advice: “you’ll never make it, give up now.” Angered, the printer did not “give up” and, to this day, has refused to buy a press from that manufacturer. That meeting and the salesperson’s stupidity proved costly, but not for the printer, who has gone on to great success. This manufacturer simply lost out by making wrong assumptions. How crazy to lose a potential order when the loss had absolutely nothing to do with the actual printing press or the company behind it. 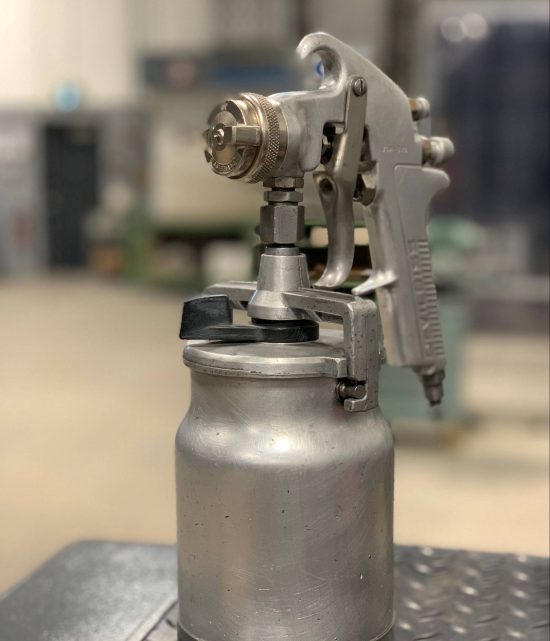 In my 40-plus years spent in this industry, I worked hard to read a person’s bias and preferences. Our usual clients were small to medium-size firms, and often the owner started the business working like a dog to build and nurture it. As the company grew, employees were hired, and they brought along their own opinions and preferences. In those early days, if a printer purchased a press that seemed never to let them down, they generally stuck with it. I especially loved dealing with those entrepreneurs because they were genuine. If they cut their teeth on a particular press, they stayed loyal.

Salespeople play essential roles in decision-making and, ultimately, which machine ends up as number one. The owners that have operated machines could see through any rep’s sales pitch and personality. If the salesperson had experience running a press (and this is quite rare), then they often spoke as peers. However, if that salesperson was fast and loose with facts, or offhandedly muttered untruths or repeated manipulated gossip, a void could quickly form. Today’s printer/manager who is the decision-maker rarely has the “on-press” experience and is much more likely to use a salesperson to arrive at a decision. That same manager is also less likely to be loyal to a brand.

Ultimately. coming to a determination and therefore rating a top choice can be quite simple when other variables are factored in. Is the current service support pleasant? Were the suppliers easy to deal with and willing to solve problems quickly, or was it always difficult to get parts and service in rapid time? How many technicians are in my area, and of those, how many are any good? If every time you need assistance and someone has to always fly in, this is both costly and slow. When you look at the entire industry, there is a wide disparity between the best and the worst manufacturers and dealers when it comes to the most crucial decision factor: service and customer care.

Whether your choice is German or Japanese, the best press doesn’t care what language the factories speak. Although both ecosystems try and do the same quality work, that doesn’t always mean they are equal. Consider how language could impact your choice. Is there confusion when you’re desperate for the right information? Are there difficulties having the press serviced or updated? Can a foreign language affect the speed of response?

Communication and methodologies can be troublesome and not intentional, but one wonders if an Enigma decoder is needed to unscramble some manufacturers’ thinking processes. Difficulty dealing with a supplier is a crucial reason why printers choose the machines they do and alter their preferences and bias towards a specific manufacturer.

Listen and learn from your customers

So, if we are going to rank equipment from first to worst, it’s the overall picture that counts more than a particular brand and machine model. Whenever we had customers at our plant for a press inspection, I took particular interest in getting to know all the entourage members, from the owner to his designated pressman. Understanding how both think and what biases they hold helped me focus on what decisions they would ultimately make.

The best press is more than a salesperson’s chatter. It’s about harmonizing one’s instincts with positive experiences. Indeed, in today’s environment, with younger managers making critical choices, the price still gets top billing. But after price, there is that gut impression often based on previous experiences. If it were fair and easy to rate machinery based on simple criteria such as a manufacturer’s experience or the number of units in the field, decisions could be clear. For example, if you appreciated legacies, of those that have been manufacturing offset presses the longest, manroland wins that prize, with Komori and Koenig & Bauer not far behind. If it’s based on units sold, then Heidelberg takes the win. Innovation? Now that gets much more difficult.

Koenig & Bauer, the world’s oldest press builder, has launched a brand-new press: the Rapida 106 X. Not be dismissed, Komori, manroland, RMGT and Heidelberg have also recently upgraded their platforms. There is no clear ultimate number-one here, even though the Rapida is said to be able to run carton at an unfathomable 20,000 sheets per hour.

Every press manufacturer builds fantastic equipment that, given the right set of circumstances, would be a wise choice. Ranking these companies is misleading to anyone not coming in at the top spot. The best way to rank presses is to weigh other factors, including price, service response time and your own experience and bias. Just recently, a large high-end cosmetics printer bought a new press. This firm had been loyal to a supplier and had several of the manufacturer’s presses on the floor, going back to the 1970s. A new plant manager arrived about a year ago, and things changed quickly. This plant manager had a decades-long association with another press builder, knew most of the people, visited the factory a few times, and guess what? This printer just changed suppliers.

We all have particular tastes and prejudices that are instrumental in how we live our lives and make the decisions we do. I will never change my DeVilbiss JGA even though there are possibly better alternatives. My brand of vehicle hasn’t changed in almost twenty years. I choose what I like, but it may not be the best. The one that gets the winning order either has the cheapest press (especially a factor today) or has understood a buyer the best, and shown it exemplary service. That manufacturer gets the number-one slot.

This article was originally published in the July/August 2020 issue of PrintAction.