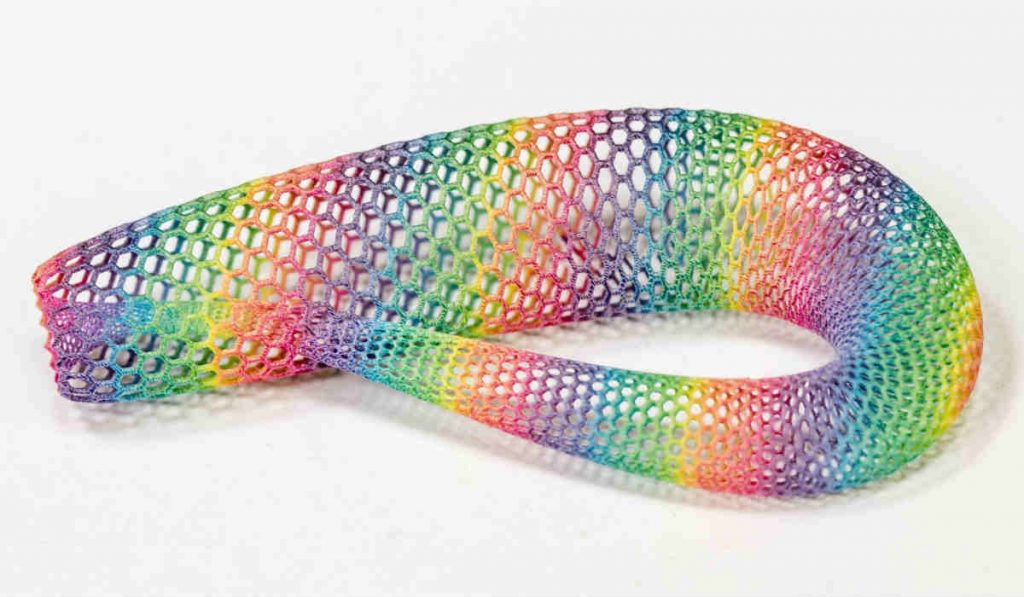 This 3D printed structure was a prototype design done by Krasul on one of HP’s first Multi Jet Fusion printers. Design News explains the Krasul project shows how HP’s multi-agent printing process, by placing specific colours at the voxel level, can enable colour gradients throughout a part. The same process can also print different mechanical properties like elasticity variations throughout a part via transforming agents.

3D printing begins to move past consumer hype into industrial design and onto the production floor, as manufacturing and logistics companies plan for significant changes to their business models.

Financial institution ING in late-2017 reported the current trajectory of 3D printing could result in one-quarter of world trade being wiped out by 2060. This was its Scenario I, in which 3D printing continues to evolve at an annual growth rate of 19 per cent, with the possibility of locally 3D printed goods cutting trade by 40 percent. Scenario II presented by ING considers an accelerated growth rate in 3D printing of 33 percent, which would wipe out two-fifths of world trade by 2040. ING’s analysis also predicts, that at current growth rates, conservatively half of all manufactured goods will be printed in 40 years.

These long-term predications cannot possibly consider all future supply-and-demand variables, of course, but today 3D printing constitutes less than one percent of global manufacturing revenue. Wohlers Associates, an independent consultancy specializing in 3D printing research, estimates 3D printing will eventually capture five percent of the global manufacturing capacity, which would make it a $640 billion industry (all figures in U.S. dollars). A 2016 report called 3D Printing: The Next Revolution in Industrial Manufacturing, published by logistics giant United Parcel Service (UPS), estimates today’s 3D printing market to be worth anywhere from $7 billion to $9 billion, predicting it could reach $21 billion by 2020. Consultancy firm McKinsey estimates the 3D printing market will grow to reach anywhere from $180 to $450 billion by 2025.

The range of these growth predictions largely comes from the inability to fully understand how massive corporations – with the ability to shift markets – might alter their manufacturing models to leverage 3D printing. It is unlikely that 3D printing will predominately replace – or even penetrate – mass production processes in several product sectors, but it does hold the potential to touch most any category of discrete manufacturing. IT research firm Gartner estimates 10 percent of all discrete manufacturers will be using 3D printers by 2019 to make parts for the products they sell or service.

Watching 3D grow
3D printing is currently best suited for making complex, small-batch products, as illustrated by its heavy usage for prototypes and parts. The UPS report describes parts production as the fastest-growing application of 3D printing, specifically functional parts at 29 percent and prototypes at 18 percent. In November 2016, UPS invested in a company called Fast Radius to launch a new logistics model for parts production via 3D printing.

Fast Radius’ primary production facility is now located in what it describes as the world’s largest packaging facility, UPS WorldPort (Louisville, Kentucky), which also serves as the logistics giant’s global air hub. Fast Radius explains this “strategic end-of-runway location” provides it with up to six hours of additional production time versus using a near-site location, typically controlled by a third-party. 3D printing will likely experience growth under a service-bureau model as technologies mature, in terms of both function (speed and quality) and cost. More manufacturers and product companies will also change their business models to install 3D printing systems.

Research released in 2017 by IT consulting firm Gartner shows interest in establishing in-house 3D printing capabilities is “rapidly gaining traction.” Gartner predicts 40 percent of manufacturing enterprises will establish what it calls 3D printing Centers of Excellence (COE) by 2021, pointing to existing industrial-scale efforts by Boeing, Johnson & Johnson, Rolls Royce and Siemens. In September 2016, Fortune.com reported 3D-print startup Carbon received $81 million from a group of investors, including GE Ventures (General Electric), BMW Group, Nikon and JSR, as an extension of a $100 million funding round in August 2015 led by Google Ventures.

In December 2017, Yahoo Finance reported Carbon closed on $143 million of a new funding round to accelerate its global expansion. “Once completed, this round will bring the Silicon Valley-based company’s total raise to a whopping $422 million and reportedly boosts its valuation to a mighty $1.7 billion,” writes Beth McKenna. “To provide some context, the two largest publicly traded pure-play 3D printing companies, Stratasys and 3D Systems, have market caps of $1.14 billion and $1.13 billion, respectively.”

The prospects for 3D printing growth are buoyed by venture-capital investments with the participation of established companies like UPS, which holds the world’s largest network of distribution centres. Billed as The Global Platform for Part Production, Fast Radius enables companies to manage the design, engineering, prototyping and production of end-use parts. Its in-house 3D printing capabilities are supported by partnerships with third-party providers of traditional parts manufacturing techniques like metal extrusion, CNC machining and injection molding.

3D printing can help reduce the use of expensive processes to create tools, molds and modifications for production lines. In 2017, imaging giant Ricoh began replacing some of its traditional metal tooling with lightweight 3D printed jigs and fixtures for a large-format-printer assembly line in Japan, where an operator typically handles more than 200 parts a day. Ricoh is specifically assembling an electronic component using a 3D printed fixture produced in anti-static ABS plastic on a Stratasys Fortus 900mc printer.

“Because we are producing an enormous number of parts, it takes a lot of time and effort to identify the right jigs and fixtures for each one. This manual process has become even lengthier as the number of components grows, requiring that an operator examine the shape, orientation and angle of each part before taking out a tool and placing it back in its original fixture,” explained Taizo Sakaki, Senior Manager of Business Development, Ricoh Group. “[Now] we are able to customize the tools according to the part and produce them on demand, which is helping us restructure and modernize our production process.” Sakaki explains Ricoh would typically outsource machine cut tools that could take two weeks or more to produce. Ricoh’s operators can now determine the shape and geometry of a fixture that corresponds to its associated part through 3D CAD software and 3D print it in one day.

“Prototyping is the reason 3D printing exists, because there is nothing better to make one-offs particularly if it is a small part with high detail,” said Stephen Nigro, VP, Inkjet and Graphic Solutions for HP Inc., which launched its Multi Jet Fusion products in 2016. HP – an inkjet printing pioneer – plans to disrupt the 3D printing market with this new high-speed, relatively low-cost platform. HP explains on a current high-cost, high-quality laser sintering machine, for example, 1,000 gears would take at least 38 hours to fabricate, while those same 1,000 gears could be produced within three hours on Multi Jet Fusion technology.

UPS shared a telling quote from an engineer/senior industrial designer at a consumer electronics company: “Our prototype turnaround time reduced from three to six months to two to three weeks. Time-to-market for new products reduced by 40 to 60 percent. 3D printing is viewed as an enabler here for expanding into new markets. We initially used it once a week, but now it’s used daily.” UPS explains the next big 3D printing opportunity for consumer electronics is in smartphones, which comprise an estimated 35 percent of total consumer electronics sales.

As early adopters, the consumer electronics and automotive industries each contribute 20 percent of the total 3D printing revenue, according to UPS, with aerospace following closely behind. Mercedes-Benz Truck in 2017 began its first 3D-printed spare parts service, allowing customers to 3D print more than 30 different spare parts for cargo trucks. Logistics giant DHL, in its own 2017 3D printing report, explains hundreds of millions of spare parts from across all industries are kept in storage. DHL used data from Kazzata – an online marketplace for 3D printed parts – to estimate the share of excess inventories can exceed 20 percent.

“[3D printing] may never be as efficient as a 3-story stamping press at banging out ribbons of metal into panels, but, in one shot, 3D printers can form complex – indeed impossible-to-make – parts that a press could never solve,” wrote Pete Basiliere, Research VP at Gartner, which first used its highly regarded Hype Cycle Report to analyze 3D Printing in 2016. “Our Predicts research highlights three industries – medical devices, aircraft and consumer goods – that are making significant strides in implementing advanced manufacturing practices enabled by 3D printing. To a significant extent, the experiences of these industries can be applied to all manufacturing industries.”

Gartner research predicts 75 percent of new commercial and military aircraft will fly with 3D-printed engine, airframe and other components by 2021 – “After 20 years of use, Boeing has additive manufacturing at 20 sites in four countries and more than 50,000 3D-printed parts are flying on both commercial and defense programs.” He also points to how GE Aviation’s new Advanced Turboprop engine design converted 855 conventionally manufactured parts into 12 3D-printed parts, resulting in 10 percent more horsepower, 20 percent fuel savings, a shorter development cycle and lower design costs.

Basiliere also describes how Airbus is utilizing 3D printing in the construction of its airplanes, having already introduced more than 1,000 3D-printed parts in its A350 model. In 2016, Airbus unveiled a completely 3D-printed drone called Thor consisting of 50 3D-printed parts and two electric motors, explains Basiliere – “This aircraft, which is four metres long and weighs 21 kg, was constructed in just four weeks.” Lockheed Martin in 2017 announced it is using 3D printing for titanium satellite components, reducing cycle times by 43 percent and costs by 48 percent.

The evolution of 3D printing is poised to generate new applications with DHL pointing to 4D printing, as developed at MIT, which adds the dimension of change to 3D-printed objects: “4D-printed items can self-assemble and adjust shape when confronted with a change in their environment like temperature. Imagine water pipes that shrink or expand depending on water flow, or tires that adapt to wet surfaces and change back to their original size and pressure when the roads are dry again.”  The potential of 4D printing or similar market-boosting innovations is supported by the ability to print electronics under conditions similar to 3D printing.