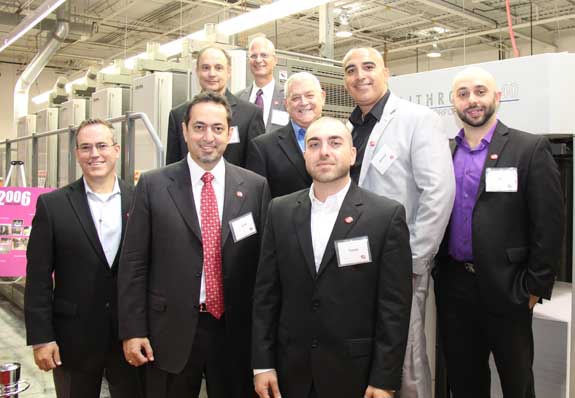 Members of 4over’s management team in front of the new 6-colour Komori S40 in Mississauga.

An open house was held last week at the 50,000-square-foot Mississauga facility of 4over to celebrate the installation of a 40-inch Komori press. The online-focused trade printer began operating out of its Canadian plant in late 2011.

4over now runs more than 400,000 square feet of production space with facilities also in California, Ohio, Texas, New Jersey, Illinois, Arizona and Florida. The press being put into Mississauga is a 6-colour Lithrone S40. It joins an existing 29-inch Komori press put into operation when the plant first opened.

After beginning the company in 2001 with a used 4-colour Heidelberg GTO, in a 2,000-square-foot store-front shop in Burbank, Megerdichian soon after began to build his network as an all-Komori operation. In April 2002, 4over took delivery of a Komori S226 II and a year later began preparations to move into a 10,000-square-foot space. By 2004, 4over was running Komori LS840P and LS640P perfecting presses, as well as an HP Indigo 2000.

In 2005, Megerdichian added a HP Indigo 5000, as well as new UV coating technology. In 2006, he then installed the United States’ first Komori LS-540 SP CC, a super perfector double coater, with the move into a new 72,000-square-foot facility in Los Angeles. The company also added a brand new Komori 29-inch LSX. 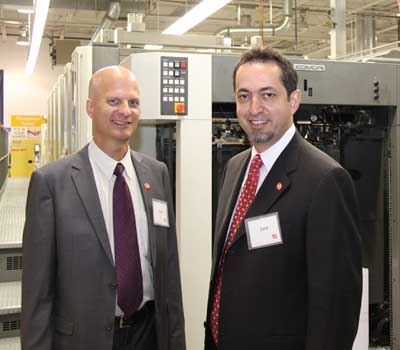 By 2009, Megerdichian began the expansion of 4over’s printing network with initiatives in Newark, New Jersey; Miami, Florida; and Arlington, Texas. Ultimately, the company expanded to Mississauga, Ontario, in December 2011 with the 29-inch Komori press.

Mississauga Mayor Hazel McCallion attended 4over’s August 26 open house, as she did back in mid-2012 when 4over held its ribbon-cutting ceremony for the new Canadian plant.