Recalling some of the major events in the industry 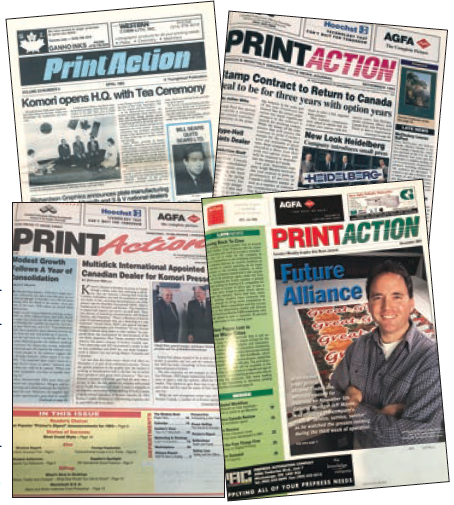 Canada’s graphic arts industry has navigated many peaks and valleys during the past 60 years. Only one publication has continually captured all the developments, and that is PrintAction (PA).

From the 1970s to 1990s, the industry experienced many transformative phases. During the 1970s, the federal government’s position on “Printing in Canada” drew a lot of criticism. Canadian and/or U.S. tariffs were either placed on or taken off many mass-produced products such as books and magazines. Parliament waffled between groups who wanted cheaper printing made in U.S.A. and those who pushed to protect Canadian workers.

Canadians were afraid of their American neighbours, who had bigger plants and could produce print at a cheaper rate. PrintAction made it a point to amplify and promote our country’s printers and featured articles both railing against and encouraging parliament to do something about work being lost to the U.S.

Technology advances, with a constant stream of new devices, filled PA’s pages in the 1980s, as prepress was turned on its ear with computer-driven solutions. These new technologies would soon drive out film. At one time, it was possible to clearly distinguish printers that typeset and output film (and plates) and press owners. PA educated us on how the two distinct sectors would soon embrace new tools and become one. By the mid-1990s, virtually all prepress houses either closed shop or realized they only needed a printing press to stay in business. Also, a cursory perusal of some back issues of PA illustrates that mail rate fears are generational. During the 1970s and ’80s many articles appeared in PA about the negative impact of postage price increases.

PrintAction covered the Canadian printing industry’s biggest stories whether it was the dawn of DTP or the latest innovation in die cutting.

In my experience, PA is/was a must read for our industry. In the early 1980s, Canada was starting to recover from a severe recession. Interest rates hovered around 20 per cent at that time. Times were tough and many shops closed down or were sold off for pennies on the dollar. However, business started to improve by mid-1983 when a firestorm of major announcements erupted within months of each other.

Linotype Canada had, for decades, been a large supplier of equipment. However, Linotype was not doing well in the early 1980s and started to lose many of its prized dealerships, particularly Komori, Stahl, Schneider and Brandtjen & Kluge. Shortly after the highly successful Graphic Trade 81 (October 1981) show, the Komori agency went into the hands of a new company led by former Linotype Canada manager Frank Wilson. The new business would later be formerly incorporated by the Komori Corporation of Japan as Komori Canada.

While chaos surrounding the Linotype fiasco played out, another drama emerged on the front pages of PA’s April 1983 edition. Under the caption “Komori opens H.Q. with Tea Ceremony” was the news that Bill Sears, scion of the Sears family and president of the largest graphic equipment supplier in Canada—holder of the Heidelberg agency for over 20 years—had resigned from Sears Ltd., a division of Reichhold. It was suggested Sears had made a play to repurchase the company from Reichhold, and when rebuffed, tension and bad feelings entered the picture, resulting on Bill Sears getting the last laugh.

Over the next six months, printers would eagerly wait for each issue of PrintAction to read the industry-changing stories. By the end of 1983, Heidelberg Canada was incorporated and it began selling directly to Canadian printers on January 1, 1984. Through it all, Miller Corporation aligned with Sears and a fierce battle raged for a few years until Heidelberg came out victorious.

PrintAction remains the go-to magazine for print service providers, sharing Canadian stories from coast to coast. They have been a strong supporter of education, trade shows and “women in the graphic arts”. When it comes to trade shows, PA was not only visible, but also a strong supporter and organizer, often producing special show editions. For many years (up to December 1993) PA was printed as a tabloid, and on newsprint.

All major events have been covered by PA from the launch of Heidelberg Speedmaster in 1975, Komori Lithrone in 1982 and Manroland’s 700 in 1990 to CTP, coating techs, electrophotography and inkjet. All of these were well discussed so printers could take informed decisions.

Further, the rise of media company Quebecor is an important part of our history—they purchased Ronalds Federated from Bell Canada in 1988. In 1990, they acquired Robert Maxwell’s Maxwell Communication Corporation.

Another company that must be mentioned is Transcontinental. In 1976, it started off as a flyer printer, but is now Canada’s largest printer.

One PrintAction feature, long retired, was the “Company Reports” column, which published the financials of some of the largest public companies. Many of these firms have vanished today, but were they ever making money! In April 1981, the Toronto Star a profit of $22 million for 12 months. That is $65 million today. Moore Corporation earned in profits $110 million (U.S.) or $325 million today. The rest of the industry, struggling for a seven per cent net margin, could only read it and weep. Printing on newsprint had its advantages; PrintAction easily soaked up the tears.