In 2015, more than 200 people gathered in Toronto to celebrate the progress and innovation of Canada's influential printing industry. Now in its 10th year, PrintAction's Canadian Printing Awards program is based on four distinct sections, including: Printing, Environmental, Technology, and Industry Achievement. 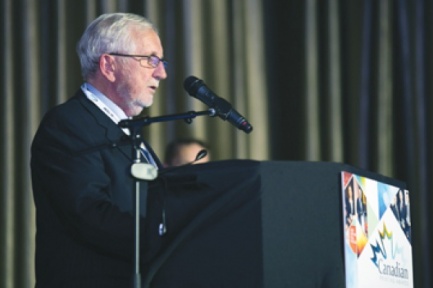 Less than a year immigrating to Canada from The Netherlands in 1961, Dick Kouwenhoven began to form what is now recognized around the world as a trailblazing printing company not just in terms of its high-end sheetfed perfecting capabilities and bleeding-edge adoption of imaging technologies, but also in its environmentally progressive position.

The day after Kouwenhoven arrived in Vancouver, BC, he found work as a typesetter based on the experienced he gained from eight years of learning and working the trade in his Dutch hometown of Delft. Six months later he joined a small storefront printery by the name of Hemlock Printers and soon after took on an ownership role. In 1968, Kouwenhoven bought out his partner and incorporated Hemlock Printers, borrowed some money to install better presses, hired staff, and moved to larger premises.

During the 1970s, Hemlock Printers expanded with two large-format presses and began producing two-colour direct mail for Eatons, Simpsons-Sears and other major retailers. Hemlock became a true force in the Vancouver print market in the 1980s with the installation of more presses and, in 1986, moved to its current location in Burnaby. The BC facility expanded again in 1993 to make room for Hemlock’s full-service prepress department as the company began its world-first journey into computer-to-plate imaging with Vancouver’s Creo Inc.

Hemlock, which was one of the first independent printers in BC to reach into the U.S. market, is now one of the largest commercial printers in the Pacific Northwest, housed in a state-of-the-art 79,000-square-foot facility employing more than 170 people, with sales in excess of $30 million. It remains a privately owned family enterprise built on what Kouwenhoven describes as service integrity, quality products and a commitment to continuous innovation. Hemlock also now operates 100 percent carbon neutral and is a global business leader in sustainability.

Printing Leader of the Year 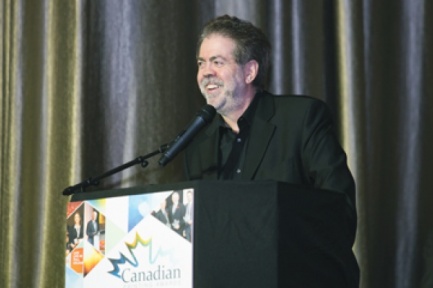 Jay Mandarino oversees the daily operations of 24 companies with total sales reaching over $33 million. More than 60 percent of C.J. Group’s 24 companies have been purchased over the past five years, including 10 over the last two years.

In February 2015, the C.J. Group began putting the final touches on its new 80,000-square-foot facility located on the perimeter of Toronto’s downtown core. As a result, C.J. Group is now comprised of close to 160,000 square feet across three facilities. Mandarino holds the ambition to become the largest independent full-service printing operation in Canada and continued to move toward this goal in 2015 by installing North America’s first Scodix Ultra Pro with Scodix Foil and Canada’s first Highcon Euclid II+ system.

Mandarino is also well-known for his philanthropic pursuits in helping to raise more than $50 million over the past 26 years for more than 250 different charities.

Emerging Leader of the Year 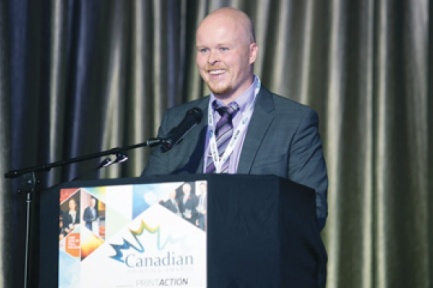 When Damian McDonald was in his early-20s, he faced a decision about whether to continue a promising career in Web development, which had taken him to epicenter of computing power in California, or to join his father, Mike, to lead the family business into the future.

McDonald chose to leave Silicon Valley and return home where ampersand was housed in Guelph, Ont. His technological influence was immediately felt at the company, which pushed its 29-inch sheetfed press to print well over 500-line screen, one of the only printers in Canada to do so, while also working to overcome the early-day bottlenecks of sending massive data to one of the region’s most advanced digital presses.

McDonald also focused on emerging XML interchange with prepress and led ampersand to win consecutive CIP4 awards for Best Process Automation, competing against world-leading printers. As President, McDonald is now driving ampersand into the future in a new Guelph facility with a Xerox iGen 150 and a 40-inch press that continues to produce High Definition staccato.

Community Leader of the Year 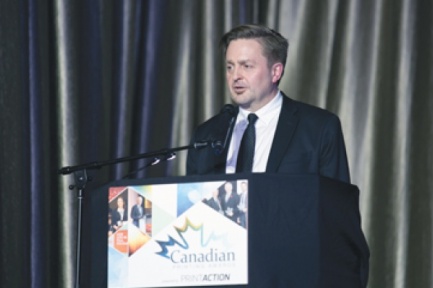 Scott Gray, responsible for bringing together the passions of one of the world’s most-renowned printing companies, spends countless hours driving the Canstruction Vancouver program, now entering its 14th year.The non-profit competition, founded by MET Fine Printers, brings teams together to build sculptures out of canned goods, which are put on public display across the city, before 100 percent of the food is donated to the Greater Vancouver Food Bank Society (GVFB).

An independent judging panel, working from a blind scoring system, poured through more than 230 submissions to determine Gold, Silver and Bronze recipients across 21 Quality Printing categories, as well as a Best of Show winner from the entire group. Recipients of the Environmental Printing categories, which are the foundation of the Canadian Printing Awards, were determined by PrintAction magazine based on more extensive submissions.

Production challenge: Hemlock explains this project, with high expectations on a tight budget, required critical colour reproduction for the text, with exact crossover alignment and an inline spot gloss varnish applied to the images. This was produced in a single pass on Hemlock’s 10-colour Heidelberg perfector. To compel the readers, continues Hemlock, the cover uses fluorescent inks, lamination and white foil stamping. Given a short run of 750, Hemlock explains all the elements of the project came together to achieve an outstanding product at a competitive price.

Gold: The Molsons by PDI

Silver: Risk Takers, The World is in Beta, by C.J. Graphics

Bronze: E One The Shop by C.J. Graphics

Silver: Corona, Glow in the Dark Pennants, by Promoflex International

Bronze: Corona, Glow in the Dark Pennants, by Promoflex International

Most Environmentally Progressive Service or Technology

Gold: The Blueline Report 2015 by Canopy