Features Profiles
A family tradition of printing and politics 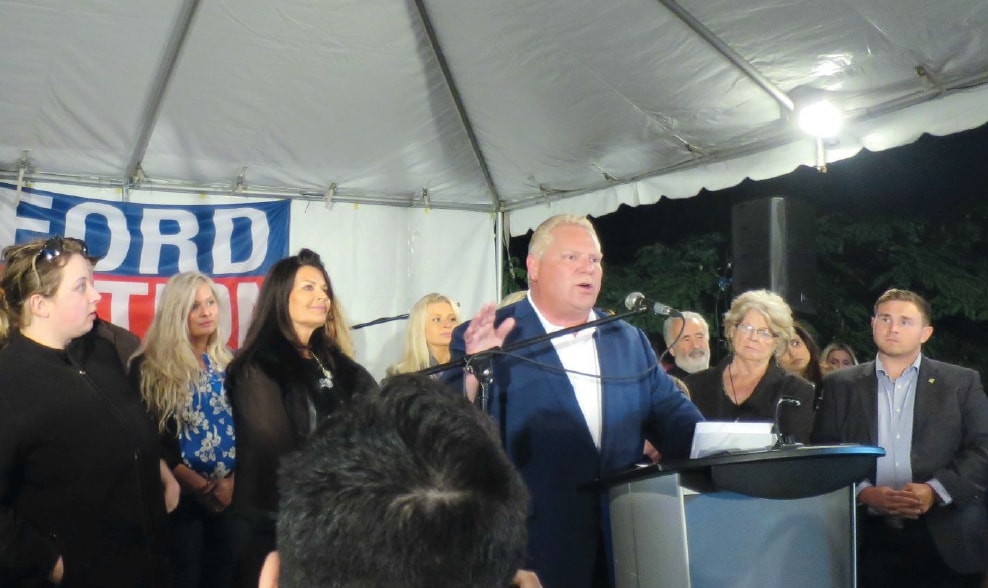 After being elected head of Ontario’s Progressive Conservative (PC) Party on March 10, Doug Ford now stands to become Premier of Ontario if his party wins the June 7 provincial election. “Our focus will be on straightening out the finances of this province,” he said, two days after his leadership victory. “We’re going to reduce hydro rates, start attracting high-paying jobs… and make this the most-prosperous region of North America.”

Ford’s recent campaigns promote his career as President of his family’s business, Deco Labels & Flexible Packaging, as a primary qualification to run the province. Ford also credits his business experience as the source of at least two of his main guiding political principles: customer service excellence and reducing the size and cost of government.

These principles were also hallmarks of Ford’s late father, Doug Ford Sr., who served as MPP in the PC government of Mike Harris from 1995 to 1999, and Ford’s late younger brother, Rob Ford, who was mayor of Toronto from 2010 to 2014. “[Rob] and I both learned customer service from our dad… at its most basic level, it just meant being accessible, honest and fair with people’s money. That had served us well [in] our family business, and it served us even better in our political careers,” writes Ford.

Ford explains how the unique nature of his business gives him insight into the economy: “Labelling has always been a special service. Every product in the world has a label on it, and in turn, I believe
every household in North America has one of Deco’s labels under the hood of their car, in their medicine cabinet, on their cosmetics or in their fridge. Very few industries are that diversified, so we get the pulse of the economy. When we’re selling labels, that means manufacturers are selling their products.”

The source of the last two quotes and portions of the following history is Ford Nation: Two Brothers, One Vision – The True Story of the People’s Mayor by Rob and Doug Ford, their bestselling autobiography published in 2016.

Business success
Ford, 53, has worked in the family business practically all his life. He remembers how as children he and his three siblings worked for their father by assembling sample packs for potential new customers on their basement ping-pong table for wages of 0.5 cents per bag. In 1962, Ford’s father had launched Deco with his partner and neighbour, Ted Herriott, a former salesman at Avery Label, who he eventually bought out. By 1970, Deco was turning a good profit, and by the late 1970s Ford Sr. had purchased the company’s present building in northwest Toronto near Pearson Airport.

In 1984, Ford undertook a diploma program in business administration at Humber College, until a faculty strike diverted him into full-time sales for Deco. Although initially he promised his father that he would return to college when the strike ended, Ford’s career in print sales took off and he never looked back.

As Ford Jr.’s influence over the business grew, he spearheaded the company’s expansion into the U.S., initially against his father’s advice. Deco’s production facilities now include the Toronto plant, enlarged to 70,000 square feet, and a 45,000-square-foot plant in Chicago, collectively employing about 200 people.

Political career
Ford’s earliest political activities involved supporting roles. In 1995, he volunteered to help Doug Holyday, one of his printing customers, mount a successful campaign to become mayor of Etobicoke. In 1995, Ford was instrumental in his father’s successful bid to become MPP for the riding of Etobicoke-Humber. Ford also supported his brother Rob’s four successful campaigns to become city councillor for Ward 2 Etobicoke North from 2000 to 2010 and again from 2014 until Rob’s death from cancer in 2016 at age 46.

After Rob decided to run for mayor in 2010, Ford himself successfully ran for city councillor in Rob’s old ward with the intention of helping Rob eliminate wasteful spending, balance the books, and implement other changes as mayor. Ford served as Ward 2 Councillor from 2010 until 2014, the year cancer forced Rob to withdraw from the race for re-election as mayor. When Rob asked Ford to run for mayor in his place, Ford hastily organized a six-week campaign that earned him 330,000 votes to winner John Tory’s 394,000. Ford planned a 2018 rematch with Tory for the mayoralty until this January, when Patrick Brown suddenly resigned as Ontario Conservative Party leader amid allegations of sexual misconduct, and Ford entered the contest to replace Brown.

“The Ontario Liberal government’s current deficit is not sustainable. With that kind of deficit, if you were in the private sector, you wouldn’t be in business,” Ford told me in a phone conversation some months before his PC leadership bid. At the time of writing, various sources place the provincial deficit at between $3 and $4 billion for the 2017-18 fiscal year. Although figures for the government’s pre-election budget for 2018-19 are still undisclosed, they are expected to include new spending that will raise the deficit as high as $8 billion.

“[Ontario Premier] Kathleen Wynne is at the lowest popularity level of any Canadian politician at any level of government,” Ford said during the same phone call. “The province is in desperate need of a strong voice. People are telling me to run, and it weighs on you. You feel an obligation.”

With Deco’s position now solidified in both the label and flexible packaging markets, Ford expressed confidence that his older brother, Randy Ford, whom Ford calls Deco’s Co-president, and the great management team they have assembled in Toronto and Chicago, will keep the company moving forward while Ford concentrates on politics.

Ford’s business platform
So far, Ford has spoke about lowering Ontario’s hydro rates and abolishing Brown’s proposed carbon tax, both of which Ford described at the February 28 leadership debate in Ottawa as “job-killers, absolute job-killers.” Ford also said he would abolish mega-million-dollar subsidies to selected corporations and instead replace them with tailored tax-incentive packages: “We’re going to give companies tax incentives to come up and open here. Now, don’t mistake tax incentives for corporate welfare. I’m dead against corporate welfare.”

In a Q&A after the debate, Ford explained: “Corporate welfare is giving Bombardier a billion dollars, a few years later another billion, another billion. I don’t believe in that. But giving a tax incentive is encouraging companies here and giving a tax incentive to open up in certain regions. If they’re up north, I’d be more than happy… Procter & Gamble’s leaving Brockville. If Procter & Gamble came up to me and said, ‘What sort of taxes can we save?’, we’d come up with a great plan to keep Procter & Gamble up there. There’s going to be 300 families without a job up there.” (Another source says 480 jobs are ending.)

At a February 21 leadership campaign event in Peterborough, Ont., Ford said: “Our company has a facility in Chicago, and every week or second week we get letters from all the other states saying: ‘We have a tax-free zone. We’ll help you with the building. We’ll even help you hire people’… But here in Ontario the message from the Ontario government is: ‘Come up to Ontario. We’re going to tax you to death. We’re going to put rules and regulations and red tape that you’ll never get through. And you’re going to have the highest property taxes, high hydro rates.’ That’s absolutely unacceptable.

“When we get elected, we’re going to go down to the border and put this big neon sign up saying ‘Ontario is open for business.’ We’re going to blaze a new trail of prosperity, prosperity this province has never seen.”

This feature was originally published in the April 2017 issue of PrintAction.