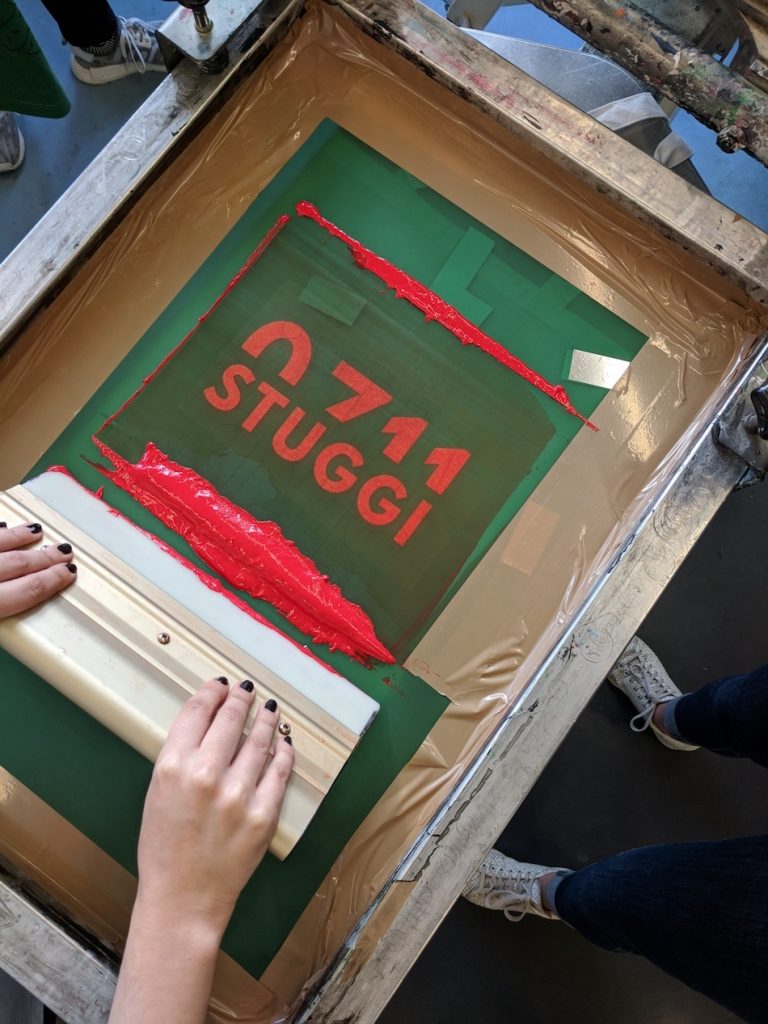 Students put screen printing theory into practice by creating their own line of textiles focused on the numbers 0711, Stuttgart’s calling code.

Standing on the platform of the Stuttgart main station – hair matted against my forehead from the long flight and following train ride, sleep in my eyes, and clutching a packet of papers bearing the familiar red stripes of the Hochschule der Medien logo – I knew things were different.

This was my second time in the city, but an excitement separate from my first visit buzzed in my chest. I was stepping off of this particular train not as a tourist, but as a student. Specifically, I was travelling from Ryerson University’s Graphic Communications Management (GCM) program to study print media production, advertising and publishing in Germany’s Stuttgart Media University.

My first days in the city were a whirlwind — bank accounts, transit passes, course registration, and countless other administrative details needed to be handled before I could begin my exchange semester in earnest. A welcome week of sorts was planned by the local students’ union, and I had the good fortune to be in a small program with some brilliant women from the United States, Spain, The Netherlands, Chile and even my home university back in Canada. Now, coming into this specialized ‘minor program,’ as it was called, we all had vastly different skillsets, and it was plain to see this would either be a blessing or a curse in the coming months. From web design and coding, to layout and typography, to marketing and communications, to colour and material science, we all had our interests and our specialties.

Our minor, officially called Advertising & Publishing, would prove to be a hardy mix of each of these facets which would have all of us off-balance, excited, apprehensive and inspired in equal measure. We would touch upon aspects of our program that were familiar, something we could personally excel at in the company of each other, while breaching new grounds in topics we had never before covered. One key example of this was to be found in the eyes of a Chilean student – fluent in graphic design and elegant typography, with a keen eye for politically charged messages beneath her magenta dreadlocks – lit up in childlike wonder upon seeing and having the chance to work with a commercial offset lithography press. Some of us had spent years around machines such as these by this point, but to be thrown back to our first encounters with these whirring, groaning beasts of machines that spat full-sized artworks faster than we could count? It inspired in all of us the same wonderment and appreciation that it did in our South American classmate. The weeks that followed were full of these moments, and our bond as a class deepened. The seeds of collaboration, competition and comradery had been planted within us, and were slowly beginning to creep up from the soil of our established educations.

Students put screen printing theory into practice by creating their own line of textiles focused on the numbers 0711, Stuttgart’s calling code.

One of my fondest memories of my time in Germany will always be the after-hours session we spent as a class in a screen-printing lab, making gifts for friends and family alike. To be given the freedom to use these tools we were learning so much and so quickly about was an amazing opportunity, and a smile still lingers on my lips when I see the stains of neon pink inks across the pair of blue jeans I was wearing that day. In working together, we found ourselves realizing this collaboration is what the industry that ties us together is all about. When the day was done, a small mountain of T-shirts, textiles and canvas bags laid in a cardboard box, ready to be divvied up and taken to our dorm rooms. Static-laden music from a German pop radio station filled the air as we washed the inks from our hands and our forearms, but we couldn’t wash the smiles from our faces. We knew at this moment the Hochschule der Medien was giving us more than the chance to expand our knowledge in the printing and allied industries — it was giving us the networking opportunity of a lifetime.

Our academic experience together was one of growth and challenges, stepping out of our comfort zones and exposing ourselves to technologies, workflows and people who we otherwise would never have explored or met. I remember how nervous I was, looking down the length of the behemoth Rotomec MW60 rotogravure, or Tiefdruck press. Never before did I have the opportunity to work with, on, in and around such a machine, and the smell of the solvents in the air while the device purred to life was intoxicating. Although I have nothing but praise for the instrumentation labs of the Ryerson GCM program, there simply isn’t the space for such a commercial-sized machine in our academic buildings, and to have the chance to aid in the running of one had me giddy with excitement. After a lengthy lecture on rotogravure theory, forms making and ink mixing, we were let into the lab to work on our own projects. Eight of us worked in tandem to mix two batches of metallic inks by hand, figuring out a sample recipe to be used in the multi-litre batch that would facilitate our press run the following week. Lab coats on, spectrophotometers active, and with a trusty pantone guide in hand, we worked tirelessly to create a product we could be proud of. It was never explicitly said by any of us, but we each knew as this was our last major collaborative academic effort of the semester, we wouldn’t stop until it was perfect. And perfect it was. To an onlooker it may have been comical, watching this group of eight students in mismatched lab coats wearing rubber gloves up to our elbows run from end to end of the press, craning our necks to monitor every inch of web that passed through the machine. However to us, it was exhilarating.

The opportunities for collaboration didn’t stop in the classroom and lab sessions though. I found myself working with a team of talented writers, designers, and production specialists on one of the HdM’s student publications, Vielseitig. In its 10th production cycle, the magazine’s special edition Sex Sells was overseen by students from every program of the Hochschule from concept to design, to a painstaking production process involving offset and digital printing, as well as using the in-house bindery to fully produce and deliver hundreds of finished products to our fellow students. Seeing the passion which redoubled the confidence of these students as they engaged with equipment and industry in the pursuit of making this production meet their high standards was breathtaking, and the excitement of holding a finished copy in our hands at the end of the process was nothing short of awesome.

International exchanges are many things, and as I reflect upon my time abroad and the experiences I had, I know that I am lucky. The printing and allied industries are not as siloed as a young student coming into university may believe. The potential for cross-border collaboration is immense, and with such a rapidly changing, dynamic and diverse industry, we can lift each other up to create more, better things than we ever could alone. Though it was hard to part with the amazing women I had the chance to spend the last six months with, not one of us saw it as a goodbye. We knew – and know – we will see each other again. You never know where opportunity may take you, but I know with people like them going into the workforce, the industry is in good hands.

Jeremy Page is a fourth-year Graphic Communications Management student at Ryerson University where he is an advocate for early student industry involvement through various student groups.

This feature was originally published in the October 2018 issue of PrintAction, now available online.