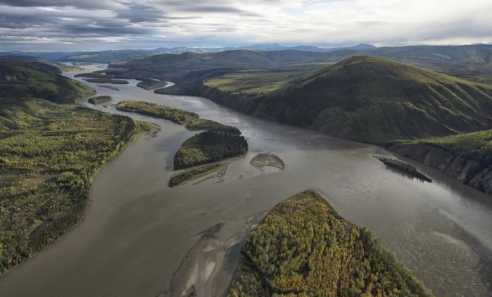 An aerial view of the Boreal forest. Photo: Peter Mather.

In recent years, online shopping has become more and more prevalent for consumers to conveniently meet their purchasing needs. One issue that has arisen from this boost in e-commerce is the massive amount of packaging required to ship online orders from warehouse to consumer.

This increase in paper-based packaging has been wreaking havoc on the world’s forests, wildlife and climate. In an effort to reduce the impact to ancient and endangered forests—especially those that are high-carbon and high-biodiversity-value forests—one not-for-profit environmental organization, Canopy, recently launched an initiative and action plan targeting the protection of 30 to 50 per cent of the world’s forests.

In 2017, 245.8 million metric tonnes of paper packaging was produced, including a high percentage made from trees logged from vital, high-carbon value forests and endangered species’ habitats. By 2025, that number is slated to grow by over 20 per cent, which conflicts with the International Panel on Climate Change and International Union for Conservation of Nature 2030 imperatives for resolving the climate and biodiversity crises.

“[E-commerce] already has a massive footprint, and that footprint is continuing to grow quite aggressively,” says Nicole Rycroft, founder and executive director of Canopy. And, she adds, those figures don’t include the over-450-million tonnes of paper that is produced each year, of which more than half is also included in packaging.

Recently, discussions about reduction have focused on single-use plastics in packaging, resulting in a market shift to paper packaging products and a greater impact on forests. According to Canopy, 30 per cent of the climate solution relies on forest conservation. It is also the key to protecting species and preventing future epidemics.

Canopy’s Pack4Good initiative was launched in October 2019 and has now teamed up with 22 major companies—representing 71 brands and $66 billion in annual revenues, including Stella McCartney, prAna and Telus—to help prevent the world’s ancient and endangered forests from ending up as shipping boxes and single-use packaging.

“We’re cognizant that packaging has been going through a bit of a zeitgeist moment in recent years,” notes Rycroft. “As companies and governments have been grappling with the environmental impacts of plastic packaging, we wanted to ensure that there wasn’t a situation of unintended consequence created with these companies and governments, in that as they tried to resolve plastic pollution, they were exacerbating the impacts on forests.”

According to TAPPI, 57 per cent of all the paper made in the world goes into packaging. And according to Smithers, an increase in e-commerce, along with the amount of packaged consumer goods in the food and beverage industry, has led to a 2.5 per cent annual increase in paper packaging.

Rycroft notes that apparel brands are responsible for over 50 per cent of B2C e-commerce, and many brands use just as much, if not more, fibre in the packaging that underpins their businesses as they do in the actual apparel that they sell.

“Our launch of Pack4Good was really to seek to ensure that we’re enabling brands to have a holistic approach to addressing their packaging impacts,” says Rycroft. “Most of the brands that we work with already have plastic packaging commitments in place. And this is kind of a complimentary or synergistic strategy for them to ensure that they’re not trading in one environmental problem for another.”

The brands that have committed to Pack4Good have vowed to increase the use of recycled fibre, smart design and next-generation solutions throughout their packaging supply chains. Pack4Good’s partners are committed to ensuring that by the end of 2022, all their packaging is free of fibre from ancient and endangered forests; is designed to reduce material use; maximizes recycled and alternative next-generation fibres, such as agricultural residues; and uses FSC-certified paper when virgin forest fibre continues to be used.

“We started working with some of them to expand their commitments, which have been really focused on viscose and rayon fabrics, to include packaging. It was just a natural extension of conversations that we were already having and expansion of relationships that were already in existence,” says Rycroft.

In addition to working with brands, Canopy works with next-generation technology entrepreneurs to provide alternatives to conventional wood-based technologies.

“Our requirement of the technology entrepreneurs that we work with is that they are price-competitive with conventional wood or wood-based technologies and that they’re at least equivalent in terms of the technical performance,” notes Rycroft. “Those alternative fibres perform equivalently, and they can be incorporated back into the recycling stream.”

After identifying the need for an action plan about 18 months ago, Canopy went into a period of deep research, analysis and scenario-mapping. They found that forests are identified as 30 per cent of the climate solution, and 80 per cent of the world’s terrestrial biodiversity depends on forest ecosystems for their existence. In January 2020, Canopy released Survival – A Pulp Thriller, its 2030 blueprint for the ramp-up of next-generation solutions to this forestry crisis.

“This is a turnaround decade,” says Rycroft. “We were really pleasantly surprised, after doing the analysis and in the mapping of scenarios within Survival, just how viable this pathway is. If we’re to protect 30 to 50 per cent of the world’s forests by 2030—which, even to us, initially sounded a little bit crazy—then how do we actually get there? Is it even possible? Survival made us feel very confident that it actually is possible, and that it’s affordable to this scale to change.”

According to the action plan, in order to eliminate ancient and endangered forests from the pulp supply chain, 324 alternative fibre and recycled paper mills must be built (or retrofitted) globally, while 7.52 million hectares of new forests must be planted for fibre. Nearly 17 million tonnes of ancient and endangered forests will need to be removed from the supply chain through reuse, efficiency and reduction initiatives by major purchasers or forest products. In addition, protected or restored forests must not be used for fibre farms.

As part of the action plan, Survival found that alternative agricultural fibres could be used in place of forest fibre in paper and packaging products to reduce the impact to forests globally. Alternative fibres include agricultural residues such as straw leftover after the food grain harvest, or microbial cellulose, which can be grown on food waste. According to Survival, prior to the 1800s, paper was made from annual plant fibres, cotton rags and flax/linen. While many parts of the world shifted to using trees, some countries, including India and China, never stopped producing paper from agricultural fibres.

Over the past decade, cleaner and more efficient technologies have been developed to convert alternative fibres, which are currently being disposed of or burned, into paper and packaging at scale. These fibres include wheat straw residues; sorghum straw residue; flax and hemp straw residue; sugar cane bagasse residue; pineapple leaves; bamboo; and fibre-specific crops, such as miscanthus and switchgrass.

While the technology required to make this a reality is not rampant, agricultural fibre pulp mills are beginning to be built around the world. For example, Columbia Pulp, located in Washington State, is the first commercial-scale wheat straw pulp mill in North America since the last one closed in the 1960s. This is just one of a dozen such ventures.

When asked about the lessons Canopy learned while putting its action plan together, Rycroft noted that we actually have more than enough fibre to make this goal a reality.

“The projections that are included in here are very conservative. We wanted to make sure that we didn’t inadvertently trade in one environmental disaster for another, that we were stripping off so much straw after the food grain harvest that farmers were then going to have to use more fertilizers on their soil,” she says.

Rycroft adds that the projections are based on rigorous assumptions around how much organic matter needs to be left on the field to maintain the organic integrity of the soil. “In spite of that, there is more than enough fibre both for the paper and packaging side as well as waste clothing on the manmade cellulosic viscose supply chain side,” she says.

Canopy aims to have agricultural fibre products certified by the Roundtable for Sustainable Biomaterials to ensure sustainable removals, the maintenance of soil carbon and other social and environmental factors for sustainable agriculture are met. According to Survival, “practices that regenerate soil carbon or avoid carbon emissions, for example diverting crop residue from traditional burning or the planting of fibre-specific crops that fix carbon on degraded soils, can be certified through to the end product”.

The action plan indicates a total investment of $68.8 billion between 2020 and 2030 will allow for consumption reduction, building mills to pulp alternative fibres, increasing recycling capacity and planting new trees to prevent the use of wood from ancient and endangered forests.

Canopy says Survival outlines a tangible plan and concrete targets for shifting the pulp sector away from its reliance on forest fibre.

“I think our reflection with pulling this together was that there’s no single silver bullet,” says Rycroft. “There are multiple pathways and technologies for us to be able to achieve this vision. Demand side players—the brand, customers and printers—all have a really important part to play in it, as do the producers on both sides, as well as enablers like the investment community in government, both in terms of permitting, and the mobilization of capital, to make this kind of infrastructure transition.”

Although Rycroft notes that there isn’t one simple answer to protecting forests, here is proof that there are ways to reduce the impact packaging has on forests by up to 50 per cent. Click here to learn more about the action plan, Survival: A Pulp Thriller.

This article was originally published in the Summer 2020 issue of Packaging for Printers.