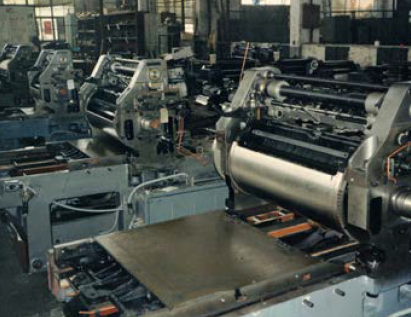 During my career, I’ve visited China many times. My first visit was in April 1989. I spent two weeks travelling from factory to factory seeking opportunities to import various types of printing equipment. With Chairman Deng Xiaoping’s decree of a new Open Door Policy in 1978, special economic zones were created to relax import and export rules, thereby stimulating western investment and trade. Exports had phenomenal growth in the following decades. Also, imports, especially of used German printing machinery, received a major shot in the arm. European dealers of used printing machines poured into China, and often left with multiple orders.

All business trade was placed under the watchful eye of government agencies, and I was accompanied by a Chinese representative who liked to be called “Jack”. We got along quite well, as Jack was knowledgeable about the global printing industry.

I was shocked by what I saw during those marathon visits. Virtually everything was a duplication of German machines. If it was a guillotine, it looked like a Polar; presses resembled Heidelberg machines; diecutters were a duplication of Bobst, Gietz or Wupa technologies. Factories were often filthy, and some had dirt floors. It was interesting to note that many cities had new world-class hotels. The divide between a new China and homes and factories with corrugated roofs and ‘bedsheet’ doors was very visible.

There was a great deal of head shaking, as I tried to understand how it was possible to rip off a copy of a Heidelberg easily. At the time of China’s great awakening, there was a tremendous need for speed, and what could be easier than simply taking apart a used Heidelberg or Polar, and making patterns from the parts? Intellectual property protection didn’t exist then; its highly flawed even today.

However, the most pressing issue was that none of the equipment I looked at had quality engineering. “Rough” would be a kind description of the state of engineering. I saw a rapidly growing China that had no guardrails to hinder what it decided to do. This was made abundantly clear during meetings with facility owners. The CEO spoke only Chinese, and often seemed less informed about the technical aspects of what his factory was producing than I did. Men who held key political positions before the open-door era were first in line to take advantage of the new system, and became rich beyond the wildest dreams of average Chinese worker’s.

The best factory I visited at that time was in Beijing. The Beijing Remin Machinery Co. (Beiren), had been building printing presses since 1952. The facility was making knock-offs of the Man Roland Parva Rekord, in addition to a variety of strange web presses. Years later, Beiren would manufacture inker and deliveries for Mitsubishi Diamond sheetfed and knock-offs of the Harris M300 folder.

With a population (1990) of 1.2 billion people, China held all the ingredients for rapid growth.

Armies of low-cost labour were begging the west to do business while offering unbelievably cheap prices. There were no federal watchdogs enforcing laws against pollution: the nearest ditch would suffice to dispose of liquid waste emitting from pop-up factories. Fines were unheard of, and still today not nearly as strict as in western countries. The pet food and infant formula milk scandals of the 2000s are just recent missteps.

Stringent quality protocols for everything from machines to pharmaceuticals were often void of any rigour in those early days.

One of the reasons for poor cast iron at that time was because they typically tossed all types of ferrous products into the pot. During the early 1990s, western buyers flocked to China. These people typically shut down their local factories because it was profitable to buy from China. Why pay taxes and high wages to workers when you could offload the manufacturing of running shoes and other labour-intensive products to China for less than half the cost?

Along with our European colleagues, our company also leaped at the boundless opportunity of selling hundreds of printing and bindery machines to China; and it’s all still going on today. 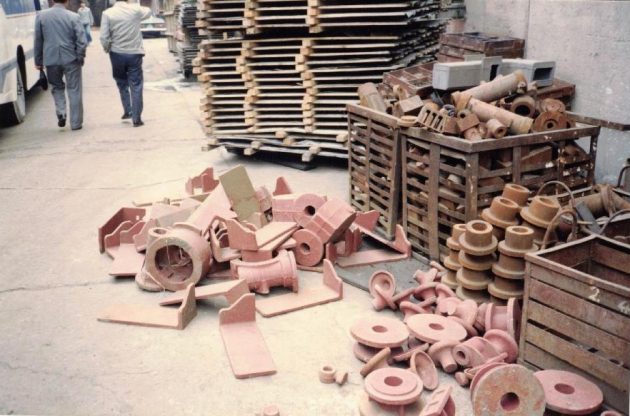 Guillotine castings waiting to be machined after they are stress relieved with age in Shanghai, China.

I made another trip 19 years later, and what I saw then was dizzying. Factories hadn’t changed much, but printing equipment quality had improved tremendously. Unique “Made in China” designs were on full display. It’s no surprise Bobst, Polar and Heidelberg have built factories there that churn out machinery, which is indistinguishable from what is produced in Switzerland and Germany. Heidelberg recently announced more than 33 per cent of all their production emanates from the Shanghai factory, and more models will be produced there going forward. Many other substantial digital platforms ranging from proofers to metres-wide inkjets are growing wildly. Some of you might be surprised at how much of your production equipment is produced in China.

The Chinese success story is one of resilience and a constant push for more and more. They are easy to do business with. They never refuse to climb the mountains appearing on the horizon. In 1989, the Chinese strategy was to copy and build. Now with a few decades of experience, China, Inc., produces better ferrous and non-ferrous castings, uses quality machine tools, and trains their workers to embrace skills once only found in the west. All this progress happened in the blink of an eye.

Still, the world is wary of China’s single-party system of governance. Life is heavily regulated by government officials in that country. Unless there are political reforms, there will always be friction between democratic countries and China.

The Chinese miracle continues, and the rest of the world is both fearful and envious when dealing with that country.

This article originally appeared in the July/August 2021 issue of PrintAction.