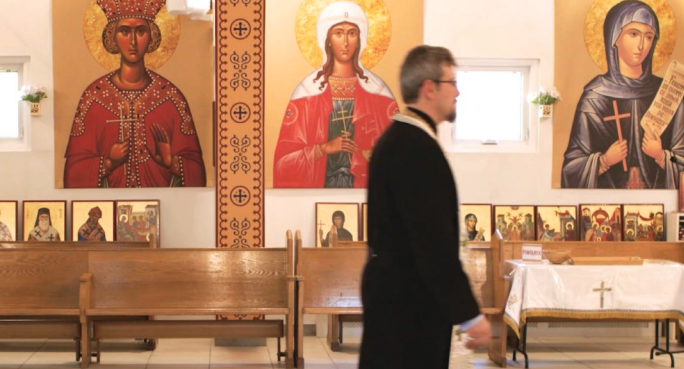 MP Repro used an HP Latex 365 printer to recreate church frescos, turning a project that would have taken 18 months to complete down to a matter of weeks. Photo: Screen capture from HP Development company video.

When Carmela Martinez, President of MP Repro of Montreal, Que., was asked to use digital printing to decorate the interior walls of Archangels Michael and Gabriel Eastern Orthodox Church with large-scale sacred images, she quickly realized that the job would present hefty challenges.

“The goal was to reproduce the appearance of beautiful full-sized traditional hand-painted wall murals using modern materials,” Martinez says. “The work had to be permanent, washable, scratch-resistant, and not fade over time. It also had to be installed on a variety of different surfaces, including vinyl, wood and walls — not only vertical walls but also curved and concave spaces, such as arches, arcades, and an interior dome.”

Fortunately, Martinez had the right assets to tackle the job — her 62-person staff had the passion and high levels of technical competence it required. As well, MP Repro was armed with an HP Latex 365 printer, a machine that works on a range of flexible and rigid substrates using HP Latex Inks, designed to be durable and highly suited to permanent installations. The printer can also be adjusted to print at different speeds, a feature that enabled operators to slow it down to produce the art-museum-quality prints needed for the church. Sonia Grobanopoulos, Country Marketing Manager – Graphics Solutions Business, HP Canada, adds in an e-mail that this printer helps expedite fast turnaround because the prints come off dry, so installation can begin immediately. Additionally, she says the HP Latex’s superior interior image quality, odourless instant-drying ink, and printheads that allow you to see fine details made it a good fit for the project.

A further advantage for Martinez was that she had already established a collaborative, mutually-trusting relationship with Cristina Sanda, a volunteer who served as MP’s liaison with the church, since MP had previously provided print services for Sanda in her day job. Another church volunteer, Justin Cotarla, provided MP with digital files of all the sacred images to be used to decorate the church’s interior. These images, called icons, depicted holy figures or biblical events in a traditional style, are typically found in Romanian and other Eastern Orthodox churches (and churches of other denominations as well). Preserved famous historic church murals of icons are painted in an exacting technique called fresco, in which artists apply pigments onto fresh plaster. Today, artists still continue to hand-paint such murals with fresco and other media in churches around the world. 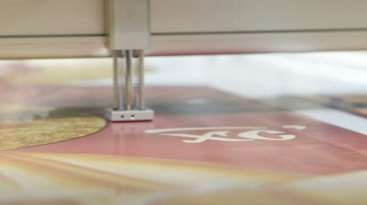 The Archangels church murals were unveiled in the fall of 2017. Photo: Screen capture from HP Development company video.

Before starting to print the icons, MP had to calibrate and modify the images provided by the client to produce uniform results on different substrates and to harmonize with the dimensions and shapes of the church architecture. Their preliminary work also involved testing different types of ink on several types of adhesive vinyl and rigid substrates, including wood and PVC panels, to produce the results they needed. For example, many traditional icons appear luminous because of their gold background, so MP tested to find a vinyl that would exhibit a similar amount of light reflectance. To facilitate the installation, MP printed adhesive vinyls using the so-called wallpaper technique in which the substrate is printed in long, overlapping vertical strips with a maximum width of 48 inches and one inch of headroom. All printed pieces were laminated with matte UV protection to make them more durable. To make the entire process more manageable and cost-effective for the church, the project was divided into three parts where MP printed and installed one-third of the graphics at a time. During the installation, two MP installers used scaffolding to help them position the graphics at heights of up to 20 feet off the ground.

The Archangels church murals were unveiled in the fall of 2017. Photo: Screen capture from HP Development company video.

In her e-mail, Grobanopoulos describes the church murals as “an interior application of fine art.” She writes that a parish following the alternative traditional route would send a request to the head of their church, the Archbishop, and once approved, an artist would be commissioned to execute the project. This would take an estimated 18 months to complete. By contrast, although printing and installing the digitally-printed church graphics was stretched out into three separate parts, the actual work took only a matter of weeks.

“Having a professional painter approved by the bishop is a very long process, so we turned our backs on traditional methods which were very time-consuming and very expensive,” says Reverend Father Constantin Ciubotariu, Priest of Archangels Michael and Gabriel Eastern Orthodox Church, in a YouTube video about the church murals. “People who have come to us haven’t been able to believe their eyes and have thought that the icons are actually painted, and unless someone wants it to be labelled painted versus printed, then I don’t see a problem. I am very happy.”

The success of the church murals brought MP Repro a subsequent commission to print and install a black-and-white photographic mural by artist Valérie Jodoin Keaton in the Hôtel Monville, a recently constructed Montreal luxury hotel. The mural covers approximately 4,300 square feet of walls, ceilings and selected furnishings in the hotel’s hall, mezzanine and gymnasium. Martinez says one of the hotel project’s major challenges was to ensure the graphics were perfectly fitted and aligned in specific zones in the building. Again, MP opted for the wallpaper technique to print and install the mural in vertical sections. The church and hotel murals earned MP Repro a Gutenberg Award – Quebec’s highest printing honour – in the Display Category in 2018 and 2019 respectively.

“In the past, North America has been slower to adopt digital wallpaper and interior décor applications. However, today we’re seeing this trend begin to take off, especially in the hospitality sector,” Grobanopoulos writes. “More and more, PSPs are looking for ways in which they can expand their offerings to customers and we think MP Repro has illustrated beautifully how with a little imagination and the right tools, you can say yes to your customers’ needs and position a unique offering to them that they might not have considered before.”

She continues that, as illustrated by the hotel mural, the beauty of digital print in décor applications is its endless personalization possibilities. “You are able to print a wide range of applications, from pillows to window coverings, curtains, and even lamp shades. This trend denotes a custom experience compared to going to the store and picking out something that others may have. We all want something that is unique to us, and most of the time, that’s not something you’re finding on the shelf. Digital printing offers us the chance to make a statement,” she writes.

MP tested various substrates to find a vinyl that would give off the same luminosity as traditionally painted icons. Photo: Screen capture from HP Development company video.

Martinez inherited her artistic sensibility from her father, Gaetano Martinez, who was born in the city of Noto, a UNESCO World Heritage Site in Sicily, famed for its masterpieces of baroque architecture. Gaetano immigrated to Canada at age 16 and in 1964, founded the business as MP Photo Reproductions. Martinez says when it came to new technology, her father was an early adopter. “He always had this vision and this curiosity about the next cool thing we can offer our clients.” He worked with Martinez in the business until 2013. Martinez’s sister Vincenza also works in the company as a designer and project manager. Besides the HP Latex 365, MP’s current arsenal of all-digital equipment comprises three wide-format UV colour printers (Océ Arizona 250, Océ Arizona 550 GT, and EFI VUTEk GS2000LX Pro), an HP Latex 570 printer, an HP Z6800 wide-format inkjet colour printer, an HP Pagewide XL8000 colour/black-and-white printer/scanner, and a KIP KC80 wide-format colour laser printer.

Gaetano passed away in January 2017 at the age of 78, and the Archangels church murals were unveiled that fall. Martinez thinks the project stands as a fitting tribute to her father’s enthusiasm for creative innovation. “It’s changed my opinion of the capabilities of digital printing,” she says.

“This project was very unique and special,” Grobanopoulos writes. “We were thrilled that MP Repro accomplished this with the local church and think the final product shows how digital printing can be used in unique ways to make art more accessible than we thought possible.”

This feature was originally published in the March 2020 issue of PrintAction, now available online.