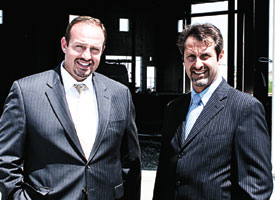 Following a report by PrintAction about Peel Graphics filing for bankruptcy on August 9, Advertek of Vaughan, Ontario, released a statement late this afternoon that it has acquired assets of Peel Graphics.

The staff of Peel Graphics, according to the statement, has relocated to Advertek’s operation in Vaughan. This includes Andrew Cook, President, and Susan Nyilas, General Manager, of Peel Graphics.

“Clients of both companies can expect it to be business as usual, but with a broader suite of services, skills and solutions to meet the growing demands and complexities of the industry,” stated Joe Montalbano, Advertek’s Director of Sales, in the statement.

Advertek was founded 14 years ago. Montalbano and Simon Spina, Director of Finance, took over ownership, along with a third partner no longer involved in the business, back in 1999. The company officially opened its new facility in Vaughan in the summer of 2011.