Making its North American debut at PRINT 09, the new :Anapurna Mw from Agfa is an UV-based inkjet press (roll and rigid) that builds on the existing :Anapurna series by adding single-pass pre-white and multi-pass post-white, which allows for printing on transparent or backlit materials – or printing white as a spot colour. Other recent :Anapurna machines include the :Anapurna M2, notable because it prints at 247 square feet per hour, and the :Anapurna M4f, which is a 63-inch, 4-colour, UV-based engine. 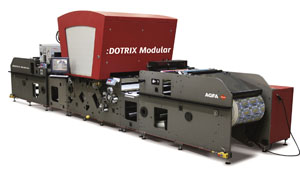 Also at PRINT 09, Agfa will be showcasing the latest incarnation of :Dotrix Modular, which is an inkjet-based, narrow-web press (25.6 inches) designed to work with a range of substrates, including paper, multi-wall, biodegradable plastics, PE, PP, BOPP, PET heat and pressure-sensitive materials. The :Dotrix can be configured roll-to-roll or roll-to-sheet.

The company will also make the North American debut of :Apogee Suite 6.0, which, employing a drag-and-drop graphical user interface, allows for the import and conversion of different file formats into a PDF, which can then be directly sent to a Web portal for soft approval, to a page or imposition proofing device, to an impaging device (CTP), a toner-based press, or export into another prepress system.

The company also plans to highlight enhancements to its industrial-scale :M-Press TIGER, which is a flatbed inkjet press – co-developed by Thieme and Agfa – featuring new printhead technology, auto-head positioning and tuning. The press, suited for screen printing-like work, can run at speeds up to 17,000 feet per hour.