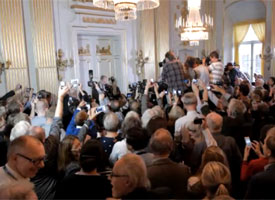 Canadian author Alice Munro has been awarded the Nobel Prize for Literature, the first Canadian woman to receive the honour.
Dubbed “master of the contemporary short story,” Munro joins the list of distinguished names which include William Golding, Gabriel Garcia Màrquez, Ernest Hemingway, and Samuel Beckett. In all, the award has been presented 106 times to 110 Nobel Laureates.
Munro, born in 1931 in Wingham, Ontario, studied journalism and English at the University of Western Ontario, but broke off her studies in 1951 to get married. She settled in Victoria, B.C. with her husband, where the couple ran a bookstore. It was this time that she began her writing career. She returned to Ontario after divorcing her first husband.
Along the way, Munro has been awarded the Man Booker Prize in 2009, the Giller prize twice, and the Governor General’s Literary Award three times. She has been characterized by literary critics as a Canadian Chekhov.
Canadian-born writer Saul Bellow was the first Canadian recipient, in 1976.
Print this page