Annan & Bird Lithographers, owned by Texas-based Consolidated Graphics, signed an agreement to purchase a large-format Heidelberg XL 162 sheetfed press, which is scheduled for a March 2012 installation into its Mississauga plant. 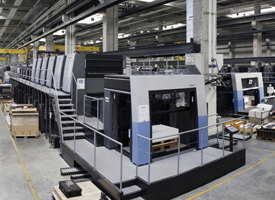 Founded in 1987 by Don Annan and Jack Bird, Annan & Bird made its first significant move into large-format offset production with the 1996 purchase of a 57-inch Mitsubishi press. The Mississauga-based company then installed a 78-inch, 7-colour Lithotronic press in 1998, followed by a Valmet sheeter (1999) and a second 57-inch Mitsubishi.

The Heidelberg XL 162 is geared toward the requirements of the folding-carton and package-printing sectors, while reaching a maximum run speed of 15,000 sheets per hour. Annan & Bird’s XL 162, a 6-colour press with coater, will also feature Heidelberg’s Prinect Inpress Control, which measures and controls colour and register on the fly.