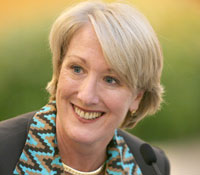 Anne Mulcahy, current Chairman of Xerox Corporation, and the company’s leader throughout most of the first decade of this century, announced today that she intends to retire, effective May 20.

“Leaving Xerox is not easy, but the time is right,” said Mulcahy. “This decision is made infinitely easier by the knowledge that I turn the company over to a gifted leader at a point when our strategy is sound, our financial position is strong, and our opportunities for growth are considerable.”

Mulcahy was Chief Executive Officer of Xerox from August 2001 to May 2009. She also took on the Chairman position in January 2002. Urusla Burns, who took over her role as CEO last year, will also succeed Mulcahy in the position of Chairman.

“A remarkable leader who inspires follower-ship, Anne was instrumental in re-creating our company at a time when we needed it most,” said Burns. “She prioritized investments in innovation, shifted our strategy to become more focused on services, and significantly improved our financial health. As a result, we have a strong foundation from which to build an even stronger company. I am grateful for Anne’s extraordinary contributions, humbled by her confidence in my leadership, and committed to honoring her impressive legacy.”