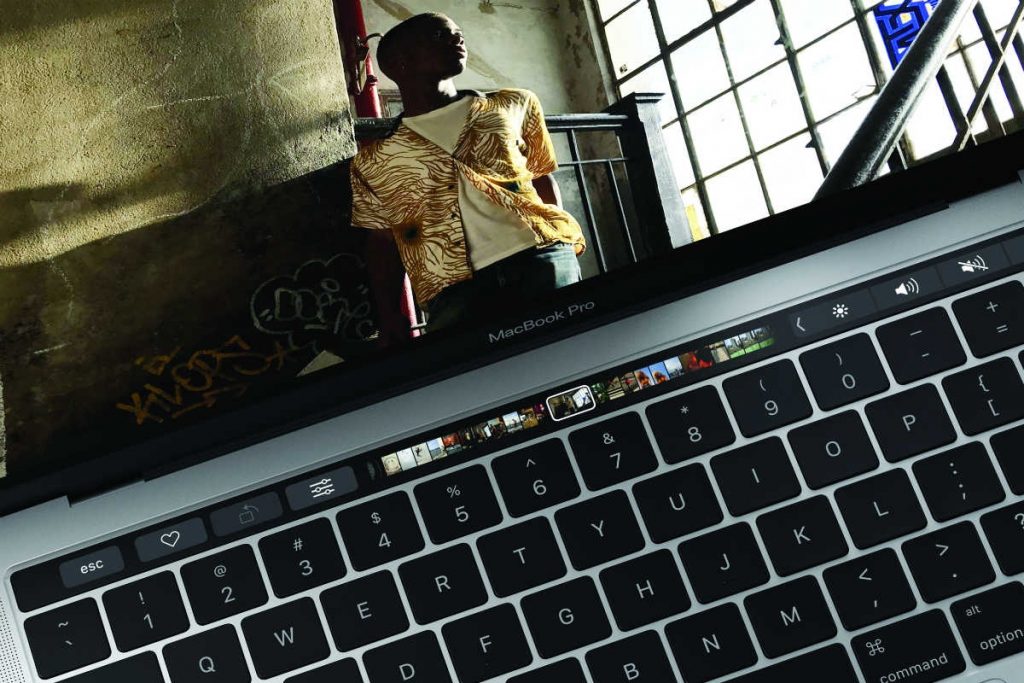 Apple’s new Macbook Pro features the new, unique Retina-quality Multi-Touch display called the Touch Bar, above the keyboard, that dynamically adapts to the application you’re using. The new MacBook Pro holds sixth-generation quad-core and dual-core processors, up to 2.3 times the graphics performance over the previous generation, super-fast SSDs and up to four Thunderbolt 3 ports.

Honestly? I’d expected to own a flying car by now. If not a flying car, at least a self-driving one, right? Instead I have to settle for Lane Change Warning and Apple CarPlay. And where is the ubiquitous artificial intelligence guiding and improving my everyday life? Siri and Alexa are fun to play with but hardly fill the bill as intelligent digital assistants. Seems like the future I was anticipating isn’t quite here yet!

For that reason, I’d tempered my expectations of the October 2016 Apple Keynote, held to roll out the new line of Macbook Pro laptops. To no one’s surprise, Apple Marketing VP Phil Schiller proudly extolled the virtues of the new Macbook Pro – thinner, faster, more graphics power and the sharpest Retina Display ever squeezed into a razor thin aluminum chassis. Additionally, Schiller boasted about the new Force Touch trackpad, twice as big as the previous iteration and the responsive 2nd-gen butterfly mechanism keyboard first introduced on last year’s Macbook.

Then Schiller coyly revealed the new Touch Bar: a narrow Retina resolution, multi-touch strip of glass replacing the function keys normally found at the top of every laptop keyboard. Schiller cleverly paused for a requiem to the underused function key that it replaced, a remnant of the earliest days of computing, before showing how the Touch Bar could revolutionize working with the Macbook Pro.

As one would expect, Touch Bar integration is baked-in to the latest Apple software ranging from Safari, Mail and GarageBand on the consumer end of the spectrum to Final Cut Pro at the high end. However, while impressive, Touch Bar integration into off the rack Apple apps wasn’t enough to tempt me to abandon my faithful 2012 Macbook Air.

But all that changed when Bradee Evans, Adobe’s Experience Design Manager for Photoshop, took the stage to preview Adobe Photoshop CC 2017 with Touch Bar support. “This new Macbook Pro and Photoshop are made for each other,” Bradee exclaimed. “This new addition of the Touch Bar really combines with the keyboard and the new giant trackpad to create this incredibly natural, expressive and powerful new way of working in Photoshop.”

During her demo, Bradee masked and combined images by accessing the Photoshop Select and Mask tool (found in the Select pull-down menu) directly from the Touch Bar. Once selected, the Touch Bar immediately displayed Select and Mask properties for easy adjustment while Bradee simultaneously worked on the image. In a non-Touch Bar workflow, users have to mouse or trackpad all over the place to access the menu, adjust the many parameters for the tool in the properties window, then mask the image – jumping back and forth between creative and technical activities.

Bradee was able to work much more intuitively by using her right had to carefully mask the image with the Macbook Pro’s sizable trackpad while adjusting tool properties on the Touch Bar with her left hand. She was able to resize brushes while masking in real time without ever taking her eyes off the image on the MBP Retina Display.

I have to admit, I was intrigued. As a Creative Cloud user, I was already eagerly anticipating the 2017 refresh of the venerable CC collection that forms the nucleus of my premedia workflow, but hadn’t considered that a Macbook Pro might be in the cards as well. After all, Creative Cloud subscribers receive the CC 2017 upgrade at no additional expense. On the other hand, moving to Apple’s Touch Bar enabled Macbook Pro line represents a substantial capital investment – one I would have to budget for. Adobe released their CC 2017 apps in January, but it took me until late April to lay my hands on a Touch Bar enabled Macbook Pro.

Photoshop 2017 for premedia
Gone are the days of the major, life-altering 18-24 month software upgrade cycle for those of us in the graphics world. With most design and layout dragons long since slain, Adobe has pragmatically chosen digital publishing and other forms of content delivery as their primary focus for innovation. In recent CC updates (including CC 2017), InDesign, Illustrator and Photoshop have seen steady, but modest improvement while other Creative Cloud applications get major upgrades.

In addition to Touch Bar integration, Photoshop CC 2017 boasts new features geared towards productivity. For starters, the New Document window has been completely redesigned to display a wide variety of presets, templates and parameters. Additionally, users can search Adobe Stock for a plethora of pre-baked layouts available for purchase. Users can also create customized presets and templates to suit their specific workflow needs.

Photoshop’s search tool has been supercharged with access to Adobe Stock, and Adobe Learn. For example, if you search “Window” the results include instructions on how to minimize windows, create an application frame as well as a selection of images of windows in a wall available in Adobe Stock. The new Find Similar function can source a variety of Adobe Stock images based on any image in your library. Of course at any time users can opt for good, old fashioned search of their assets.

Adobe has made a number of other improvements to Photoshop including support for Open SVG fonts, a polygonal lasso tool and unspecified performance enhancements.

But the biggest perk for users of the latest Macbook Pro remains Touch Bar support for a variety of PS tools such as Layer Properties, Brushes and Favourites. Users can also uniquely configure the Touch Bar by adding their frequently used commands or deleting under-utilized functions. My favourite uses for the Touch Bar include being able to scrub through the history stages and blending modes when working with Layers.

Adobe’s page layout powerhouse saw only minor improvements in the CC 2017 update. InDesign has introduced some typographical tweaks with Open Type enhancements, including the ability to preview Open Type properties on single characters or all the content in a text frame. Additionally, fans of footnotes will be happy to hear that they can now Span Footnotes Across Columns by selecting it as an option. And if you ever wanted to scale your arrowheads independently of the stroke weight, your future has arrived!

Besides the UI overhaul, Illustrator has benefited from some new features including the ability to import text into a path or shape, as well as fill objects with Lorem Ipsum placeholder text by default. You can now also crop imported raster images as you would in Photoshop in addition to accessing a wide range of colour themes using the new Adobe Colour Themes panel for your design project.

Sadly, there doesn’t appear to be support for the Touch Bar in either of the current versions of Illustrator or InDesign.

Are we there yet?
Historically, innovation has come from vying for survival – the need for a company to compete for its very existence has driven some of the greatest advances in hardware and software. And while both Apple and Adobe have all but vanquished their closest rivals, both companies are continuing to innovate, albeit on their own schedules.

Realistically, Creative Cloud subscribers would continue to update their applications regardless of the new features, simply to keep their workflows current. Thankfully Adobe has maintained a steady pace of innovation by introducing new features on a regular basis rather than saving them for a major upgrade cycle. And for those still working with Creative Suite 6 (the last version you could own), each successive iteration of Creative Cloud ups the temptation factor.

As for Apple and the Touch Bar, the jury is still sequestered. I bought a new Macbook Pro because my aging Macbook Air was starting to struggle everyday tasks. And while I chose the Touch Bar model largely due to Adobe’s support in Photoshop I’m not sure that functionality alone would justify the additional expense. I am however, finding Touch Bar integration into Apple apps surprisingly useful and I’m relying on it more every day. But will Touch Bar fever hit InDesign and Illustrator? That remains to be seen.

Currently the number of MacBook Pro users who might benefit from further Touch Bar adoption by Adobe must be relatively small compared to their wider customer base. I think Apple would have to expand the technology to more of their product line, perhaps through a product like a Touch Bar Magic Keyboard, before Adobe and other developers would have the critical user mass needed to justify further development.

Should you run out and by a new top-of-the-line Macbook Pro for your Photoshop workflow? At this stage, I think it’s too early to tell whether Touch Bar is a fad or the way of the future. If the idea intrigues you, I suggest watching the Adobe demo before taking the plunge.