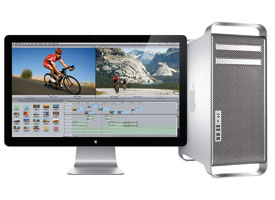 Apple computers has announced the long-awaited update to its professional computers. The new Mac Pro, which feature up to 12 cores of processing power based on Intel Xeon processors, will arrive this August. According to Apple, the computers will be 50 percent faster than the previous generation.

The new Mac Pros also feature Solid State Drive (SSD) options, which greatly improve system read speed when compared to traditional magnetic hard drives. Also available for the first time is the inclusion of two Mini DisplayPorts and one dual link DVI port, driven by ATI graphics (a 1GB ATI Radeon HD5770 is offered standard, described by Apple as being faster than even the top-of-the-line cards of the previous generation.) An optional ATI Radeon HD 5870 is available, which doubles the performance of the 5770.

Absent from this update is support for the new USB 3.0 standard. Aesthetically speaking, the new Mac Pros appear identical to the previous generation.

Alongside of the Mac Pro upgrade is Apple’s new 27-inch LED Cinema Display, which has a resolution of 2560×1440 and a built-in iSight camera. Pricing starts is listed as US$999 and requires a Mac with Mini DisplayPort connectivity.

Also announced is an update to Apple’s iMac line, which upgrades the computers CPUs to the latest generation of Intel Core i3, i5 and i7 processors. The computers will also get a boost in its video capability with new ATI hardware. An option of interest is a 256GB SSD hard drive for the 27-inch models, which is added onto a standard hard drive of up to 2TB in capacity.