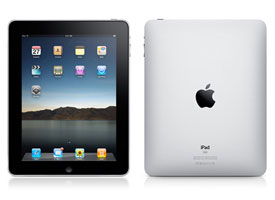 Apple announced that it has sold its one millionth iPad on Friday April 30, just 28 days after its introduction in the United States. The number bests the company’s record for sales of the original iPhone, which took 74 days to hit the milestone.

The company said that iPad users have downloaded 12-million apps from its App Store, but only 1.5-million ebooks. This indicates that most users have yet to be converted to ebooks, when it comes to their novel-reading experience.

The company delayed its international launch of the iPad until the end of this month, however, many have imported the device from the United States. Israel, fearing the device’s wireless signals would interfere with its own signals, had banned the device’s import, but have since removed the ban.

The device has caused a new wave of applications to be developed to take advantage of the iPad’s screen and processing prowress. More than 5,000 iPad-specific applications have been released in April. The iPad will also run most iPhone applications, with the exception of those which rely on camera functionality.

In the United States, the device costs between $499 and $829 (pricing varies based on storage capacity and 3G wireless capabilities). The company has only in the last week started shipping the 3G-capable version, which allows users to surf the Internet wherever AT&T signals are available. In Canada, Rogers has announced it will be supporting the iPad at launch, although pricing has yet to be announced. In the United States, AT&T offers contract-less data plans for the device.