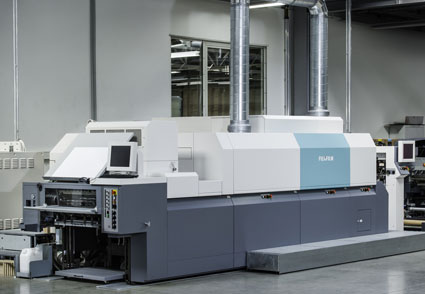 Fujifilm unveiled Arian GmbH, based in Gleisdorf, Austria, as the site of its first European Jet Press 720 installation, which actually took place back in January 2013. The cutting-edge B2-size sheetfed inkjet press is now in production to complement Arian’s screen- and toner-based printing presses.

In February 2012, PrintAction reported Digital Edge Print and Media Services Ltd. of Mississauga as the first operation in Canada to install Fujifilm’s J Press 720. Digital Edge, in addition to its offset-based commercial production, is heavily focused on in-house data capabilities with mailing services.

Arian GmbH specializes in the production of POP, POS, outdoor advertising and self-adhesive products, including 3D design and development. It is a family-run business with over 220 employees that has been in operation for over 35 years.

“As one of the leading companies in the world for screen and digital printing, customer satisfaction is a top priority for us, so we are committed to providing support for our customers in order to make their ideas and visions a reality,” stated Stephan Kollegger, Chief Executive Officer of Arian on news of the Jet Press 720 installation. “We wanted to offer the same kind of service levels on jobs we were outsourcing to offset as our mainstream in house POP and POS work, but this proved impossible. Our ability to turn jobs around quickly on the Jet Press 720 now helps us fulfill this goal.”

The applications being run on Arian’s Jet Press 720 so far include small-format POS and posters, while also allowing the company to meet what Kollegger sees as a growing market requirement for lower run lengths of flyers and brochures. “We were also impressed by the material handling capabilities of the machine which is one of the most important issues to address,” explained Kollegger. The Austrian company’s 21,000-square-metre plant includes 5,000 square metres of space dedicated to logistics.

“We anticipate the sweet spot for the Jet Press 720 to be between 200 and 500 sheets, although this may change as we put more print through the machine,” stated Bernd Büchel, Technical Director at Arian. “We are also very keen to explore the personalization and versioning that we can now do with the variable data XMF module recently installed, as over 80 percent of our work is exported and we have many multi-lingual jobs requiring versioning coming through.”

The Jet Press 720 is a four-colour inkjet press capable of printing a 29-inch format sheet in a single-pass, resulting in production speeds of up to 2,700 B2 sheets an hour. By applying a primer to the printed sheet prior to imaging, the Jet Press can print onto standard offset coated and specified uncoated papers.   The press makes use of Fujifilm Dimatix SAMBA print-head technology to reach resolutions of 1,200 x 1,200 dpi with four variable dot sizes. The first implementation of SAMBA inkjet technology is in a parallelogram-shaped chip (referred to as a print-head on a chip by Fujifilm) that packs 2,048 jets per module at 1,200 dot-per-inch spacing. It holds one of the highest jetting frequencies ever developed.

“We anticipate building up the volume of work on the machine to two shifts over the spring and summer,” stated Kollegger. “We are excited about what the Jet Press 720 brings to our business. We often invest in digital presses and end up using them for many more applications than first anticipated.”