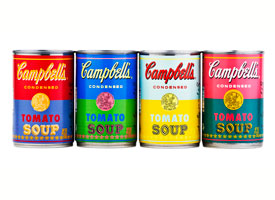 The Campbell Soup Company, in celebration of Andy Warhol’s iconic art piece from 1962, has launched a series of colourful soup cans.

Warhol famously exhibited a painting of 32 Campbell’s Soup Cans in a variety of colours, a move which helped launch his career.

The limited edition cans are produced under license from the Andy Warhol Foundation, a non-profit organization which promotes visual arts.

According to The Campbell’s Soup Company, the then-company President William Beverly Murphy, had some initial concerns with Warhol’s art, but decided to adopt a wait-and-see approach. Eventually, the company became a supporter of Warhol’s work and helped the artist establish the Andy Warhol Scholarship Fund with the New York Art Academy.

More recently, Campbell’s partnered with the The Metropolitan Museum of Art in New York as a sponsor of the education, concert and lecture programs associated with the exhibition Regarding Warhol: Sixty Artists, Fifty Years, opening later this month.

Campbell’s Tomato Soup, with its famous red and white can, was first introduced to the public in 1897 and continues to sell over 25 million cans each week.