Headlines News
Avanti donates $75, 000 to the University of Waterloo 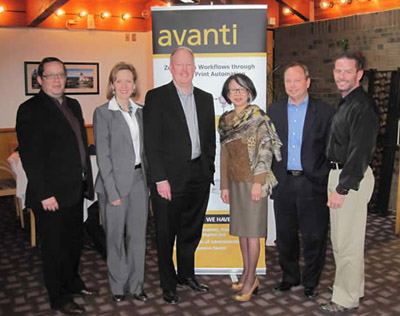 Toronto-based Avanti Computer Systems made a $75, 000 donation to Ontario’s University of Waterloo, where all three of the company’s owners originally met and from where many of it’s current employees graduated.

“The University of Waterloo played such an important role in both our professional development and in bringing the three of us together, that we wanted to give something back,” stated Patrick Bolan, Avanti’s President and CEO.

Bolan, Stephen McWilliam and Peter Funnell, who together own Avanti, which develops management information system software, including Web-to-print and workflow products, are all University of Waterloo graduates. The trio formed a business partnership and purchased Avanti in 2004. They have since tripled the size of the company and expanded its reach well beyond Canada’s borders.

“What a thrill, for me personally, to come back to see a campus with all the familiar icons from my time at Waterloo, integrated with all of the new facilities,” said Stephen McWilliam, Executive VP at Avanti, who recently visited the campus for the first time in many years to mark the $75,000 donation.

“Many of Avanti’s long-term and new employees are University of Waterloo graduates. They have played, and continue to play, a vital role in our product innovation,” said Peter Funnell, Avanti’s CFO. “We are excited to be supporting the University of Waterloo and we look forward to continuing to tap into both the co-op program and graduates for new Avanti team members to support our growth.”

From quantum computing and nanotechnology to clinical psychology, engineering and health sciences research, the University of Waterloo is today recognized as one of North America’s leading post-secondary institutions within a range of research fields and information technology.