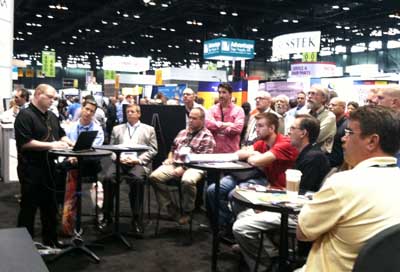 Toronto-based Avanti Computer Systems launched its new Slingshot Management Information System (MIS) on September 9 at the PRINT 13 trade show in Chicago. The completely new platform is the result of more than three years of R&D and represents one the largest investments over the company’s 29-year history.

“PRINT13 was our tenth Graph Expo [branded by show organizers as PRINT 13 every five years] since buying Avanti in 2004 and by far this was our busiest,” Stephen McWilliam, Avanti Executive Vice President, wrote in an email when contacted post-show about Slingshot’s launch. “Normally, we have our three demo pods in our booth busy most of the time for demonstrations, but thank goodness we added a large screen theatre into our booth because, at times, people were five deep and 12 across in the theatre.”

McWilliam continued to express how he felt the hot topic at PRINT 13 was workflow, with all major vendors showcasing new or updated software platforms. Avanti Slingshot was involved in a range of third-party demonstrations at PRINT 13, including prominent positions on the booths of Ricoh and HP.

One of HP’s live booth demonstrations, for example, focused on a Web-to-Print portal (XMpie uStore) submitting jobs to Avanti Slingshot, which then automatically sent parameters to HP’s Smartstream Production Centre and ultimately down to an HP Indigo press. McWilliam explains, that when the demo job was complete, run-time, stock consumption and job status information was sent directly to Avanti for updating the schedule (job status), inventory and billing.

Avanti Slingshot was the focus on of PrintAction’s August 2013 cover story.