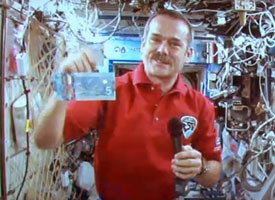 The Bank of Canada has unveiled two more bills in its line of polymer notes, which completes the series. The new $5 and $10 bills were shown for the first time today at a ceremony in Ottawa. Commander Chris Hadfield presented the first view of the $5 note while orbiting the planet in the International Space Station.

The new $5 note has a space motif, representing Canada’s contributions to international space research. The $10 note honours the importance of Canada’s railway and its role in the development of the country. The bills were officially unveiled by Bank of Canada Governor Mark Carney today. Also on hand were Minister of Finance Jim Flaherty, Paul G. Smith, Chairman of the Board of VIA Rail Canada, and Marc Garneau from the Canadian Space Agency.

“I try to inspire young Canadians to aim high. This new $5 bill should do the same,” Hadfield said. “By giving prominence to Canadian achievements in space, this bank note reminds us that not even the sky is the limit.”

The line of polymer notes, which began distribution in November 2011, has had it share of controversy, from the use of an invasive species of maple leaf to its tendency to melt under heat. The Bank of Canada has mostly dismissed the concerns as myths. The new $50 followed in March last year and the polymer $20 began circulation in November. Polymer bills were first issued by Australia in 1988 as part of the country’s bicentenial, since then nearly 10 countries have switched to polymer currency. The notes are said to have a circulation life of more than 2 1/2 times as long as traditional notes.

According to Carney, more than half a billion polymer notes have been put in circulation since 2011. The polymer notes contribute to a reduction in counterfeiting by 92 percent since 2004. The new notes will enter circulation this November to give time for retailers to adjust their cash handling systems. 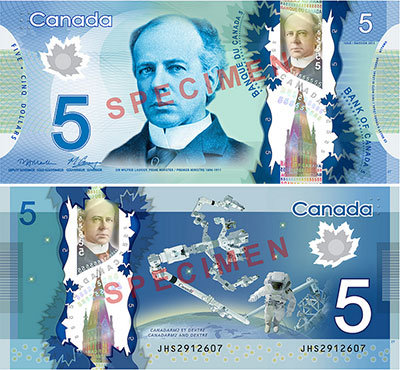 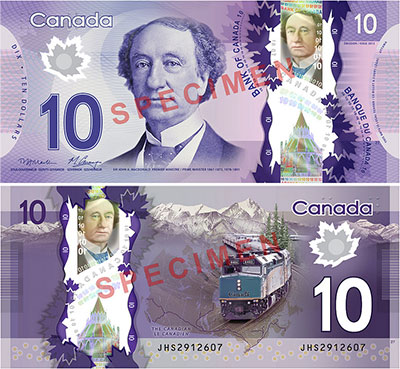