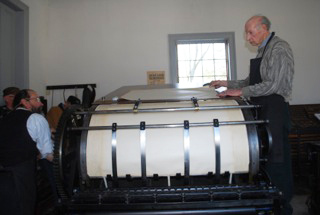 Holding a country drum cylinder design, the printing machine was made to produce newspapers with a moderate circulation and, at the same time, print general jobs.

The restored R. Hoe printing press at Black Creek Pioneer Village was first purchased in 1862 for E.J. Barker of Kingston, Ontario, to produce his weekly newspaper, the British Whig, which still exists today as the Kingston Whig-Standard. 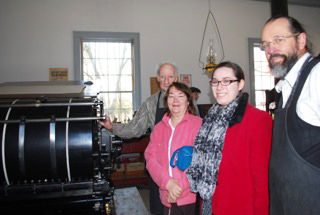 W.B. Murkar, John’s grandson, donated the press to Black Creek Pioneer Village. (Some of Murkar’s descendants were on hand for Black Creek’s printing demonstration of the restored press.) In early 2004, Ray Redmayne, who had just retired after 60 years in the printing industry, volunteered to clean the machine and explore the possibility of putting it back into working condition.

Redmayne invested over 1,350 hours of volunteer time to clean and repair the printing machine. Only a dozen of these presses are known to have survived, of which only a third are in operating order. This restoration is a example of Black Creek’s mandate to preserve 19th century technology and trades.