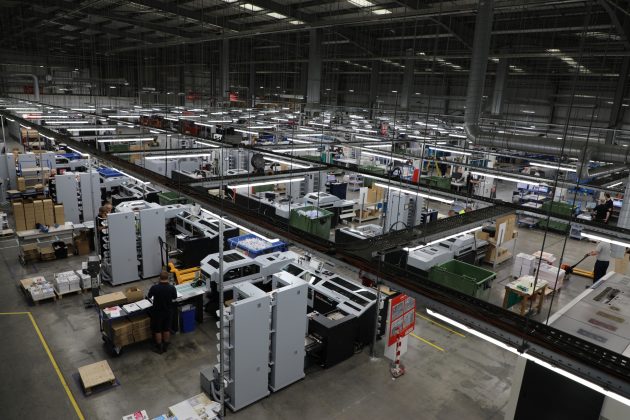 At the same time, Bluetree Group has installed a Nela automated plate punching/bending and transport system to streamline the path the SONORA X Process Free Plates take from the company’s three platesetters to the presses. Together, the investments create the simpler, more efficient workflow that Paul Bennington, Bluetree Group’s Litho Team Leader, says is “crucial when our business is about delivering work to customers as quickly as possible. On a typical job, we’ll get an order at 6 p.m., make plates and print by 9, and despatch it by 11. So, the faster we get plates from the CTP to the press, the better.”

Founded in 1989, Bluetree Group can also lay claim to be the UK’s fastest-growing printer, with annual sales of over £40 million. From a 145,000 square foot production facility in South Yorkshire, the business operates through two online print brands: instantprint.co.uk — for small businesses — and Route1Print.co.uk, which serves trade customers. In April 2020, the company responded to the Covid-19 pandemic and added a new division — Bluetree Medical — when it became the first UK manufacturer of Type IIR surgical face masks.

Whole gamut
The product range encompasses the whole gamut of commercial print, covering over 170 products, according to the instantprint.co.uk website, and printed both digitally and litho. Bluetree Group is relatively new to the latter (its first press arrived in 2013) but today litho contributes 50-60 per cent of revenue and 70-80 per cent of volume by tonnage. Lewis Rogal, head of organisational development, expects these shares to stay roughly the same for the foreseeable future: “People say how much digital has changed printing — and it has, of course — but litho has evolved just as much. Our investment in the SONORA X process-free plates and the Nela system is a case in point.”

The best production process for each job is initially decided by an algorithm, topped by, Rogal explains, “a layer of human logic. Together, they determine the standard route through the factory. Then we have a production control team that runs prepress but also controls press-loading levels around the factory, with the ultimate aim of keeping the finishing lines running. When work is constantly moving through the different print processes, we know we’re optimising output.” 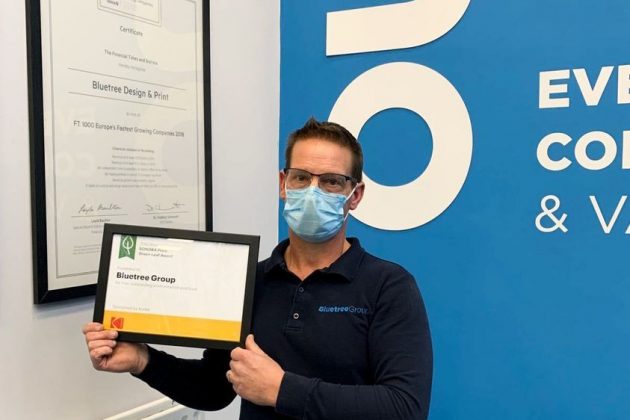 Massive decision
With such volumes, the decision not only to change plate supplier but also to convert totally to process-free technology was “a massive one”, says Lewis Rogal, “A number of factors persuaded us — not only the cost-savings inherent in the simpler, streamlined workflow, but the sustainability advantages too. We have ISO 14001 and recently won a KODAK SONORA Plate Green Leaf Award, so sustainable production matters, yet we regularly had processor issues — washing the bath out or, it felt like, changing the scrub roller every week. There were times when Paul got the plates, there was something wrong, but we couldn’t tell whether it was down to the CTP or the processor. It was really frustrating.”

Bennington takes up the story: “We’d tried process-free plates before, but had issues with scratching. Judging by the way Kodak were positioning SONORA X, however, scratching didn’t appear to be an issue, which turned out to be the case when we trialed a set. Initially, we converted one of the CTP lines and one of the Speedmaster 106s.”

Asked how smoothly the changeover went, Bennington is full of praise for Kodak plate specialists Gary Horne and Andy McGregor who, he says, “know the game and talk my language. We expected there’d be a few niggles to sort out, but we worked on them together. Once we were happy, we put a standard operating procedure in place for all the operators. There was a bit of a change in culture, moving from wet to dry plates, but it was minimal. It helps that Bluetree Group is one that’s not afraid to change.”

“Around 80 per cent of our print-runs are below 5,000,” he continues, “and the vast majority of those are in the 250-500 range, so fast job changeovers are critical. There’s the very rare 10,000 run, and we have occasionally run 50,000 on board without any problems. Cutting out processing helps a lot, and so does the Nela line, which presents plates in the same order as the running list. The operators don’t have to rummage around in the plate sections to find the ones they need for the next job — they just pick them up and put them on the press.”

He adds that the performance of the SONORA X plates on press has more than matched their wet predecessors. “We get to good copy within 50 sheets — and within 15 on some work. We’ve also been able to eliminate alcohol, something which was sort of forced on us at the beginning of lockdown by the shortage of IPA. We not only get to good copy faster; it’s further enhanced our green credentials.”

Asked if the operators would ever want to go back to wet plates, Bennington answers promptly: “No. What we did was a bold move, but that’s the Bluetree way. We’re always open to new products and processes and will take a look at the latest enhancement to the KODAK SONORA technology, SONORA XTRA Process Free plates.”

Enhanced technology
Kodak continues to lead the market with innovations in process-free plate technology with the industry’s next-generation plate, SONORA XTRA, which delivers stronger image contrast, improved handling robustness, and faster imaging speeds. SONORA Plate technology is the world’s most widely used and trusted process free plate technology, embraced by over 5,000 printers of all sizes around the world.