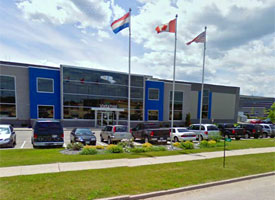 The Vistaprint production facility near Windsor, Ontario, was closed last Thursday after it received a bomb threat.
The building’s 300 employees were evacuated at about 12:30pm while the Ontario Provincial Police (OPP) swept the building. Access roads were also closed off during the process.
No bomb was found after the OPP spent the afternoon searching the plant. The facility’s 2pm shift was told to stay home, but the 10pm shift reported to work as usual.

The OPP will continue investigating the threat, which arrived at Vistaprint via a letter.

Advertisement
Vistaprint’s Windsor, Ontario, plant is responsible for all of the company’s online orders from North America. The company also has production facilities in Venlo, The Netherlands, and Deer Park, Australia, to service the rest of the world.
Print this page