The City of Burnaby, British Columbia, replaces two older presses with the installation of a new 4-colour Ryobi 524GE, which represents xpedx Canada’s first press installation in this country. 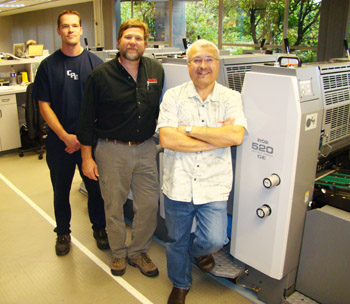 While Ohio-based xpedx has been distributing Ryobi presses in the United States for 34 years, xpedx Canada became the master Ryobi distributor for Canada back in September 2009. Established in the summer of 2007, under the leadership of Mike Kearney, xpedx Canada has around 110 employees.

The Canadian operation distributes all Ryobi format sizes, including the recently launched 42-plus inch Ryobi 1050 press and the 36-inch Ryobi 920, as well as the 31-inch Ryobi 750 and 780 series presses, the 20-inch Ryobi 520 series and other smaller format presses.

The 20-inch Ryobi 524GE press becomes the City of Burnaby’s flagship machine, with the ability to run 11,000 sheets per hour.

“We did a lot of 4-colour work on our single and two-colour presses, and you can produce quality print that way,” said Nick Karanasos, Supervisor for Burnaby’s inplant operation. “But you quickly hit a ceiling where throughput really bogs down and it’s just not efficient from a total cost perspective.”