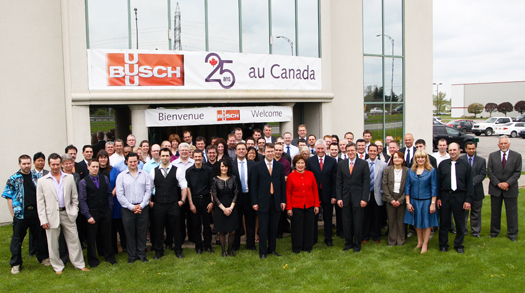 In addition to the many international presidents on hand, Paul Wieser, President and General Manager of the Canadian operation, also hosted three of the parent company’s five shareholders, Ayhan Busch and her sons, Sami and Kaya. The consul general of Switzerland in Montreal, Claude Duvoisin, and Boisbriand Mayor, Marlene Cordato, also attended the 25-year celebration.

While Busch is a major supplier of vacuum pumps to the Canadian printing industry, the company claims to hold a 90-percent market share in the food industry, as well as a significant presence in the medical sector. Busch Vacuum Technics has delivered over 700 medical vacuum and air systems to hospitals in Canada, Algeria, Bermuda, the Bahamas and China. According to the company, half of Canada’s hospitals are equipped with Busch systems.

Busch was founded in 1963 when Dr.-Ing. Karl Busch and his wife, Ayhan Busch, sought to improve and simplify vacuum pump technology. In 1971, the first Busch operation was founded in the UK, while Busch’s first German production plant was established in 1972. Two additional plants were erected in 1979 and 1980, the first in the United States and the second in Switzerland.

In 1985, after several meetings with Karl and Ayhan Busch, Wieser started a Canadian Busch subsidiary in the basement of his Sherbrooke, Quebec, home. In 1986, Wieser moved to a 180 m2 facility in Boisbriand’s Curé-Boivin industrial park and then opened a service centre in Mississauga in 1987.

“Of course I knew I was joining forces with one of the world’s largest manufacturers of vacuum pumps, but nothing could have prepared me for the adventure I was embarking on,” Wieser told the anniversary crowd, following a tour of the Canadian operation. In 1992, Busch Vacuum Technics was moved to its current location, a 2,780 m2 building on Lionel-Bertrand Boulevard.

“We will, in fact, soon be adding an extra 200 m2 of space to our building in Boisbriand, which will be dedicated to the service department,” Wieser told the crowd.

Busch Vacuum Technics currently employs 52 people within its Boisbriand facility and sales centres in Mississauga, Calgary and Vancouver. One-third of the staff can be categorized as specialized engineers. The parent company has 55 operations in 38 countries, and a total of 2,200 employees.