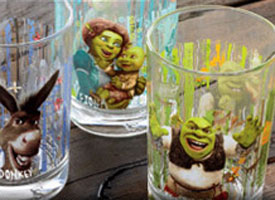 The presence of cadmium in the printing of Shrek collectors glasses has forced McDonalds to issue a recall. More than 12 million drinking glasses were produced, of which 7 million have already been sold.

The drinking glasses, produced by New Jersey-based ARC International, were found to have an unacceptable amount of the cadmium in the paint. The glasses have been on sale since May 21 on both sides of the border. The carcinogen was discovered by the U.S. Consumer Product Safety Commission.

“It is important to note that the glasses were evaluated by an
independent third-party laboratory and determined to be fully in
compliance with all applicable Canadian requirements at the time of
manufacture and distribution,” stated a McDonalds Canada press release. In Canada, there are 1.4 million Shrek glasses in circulation.

“McDonald’s Canada has a longstanding, cooperative relationship with
Health Canada, and continues to work with them as testing protocols
evolve and new scientific information becomes available.”

McDonalds has requested customers to stop using the glasses and to contact its service centre at 1-877-495-5502 with any questions. Owners can take the glasses back to any McDonalds for a cash refund.