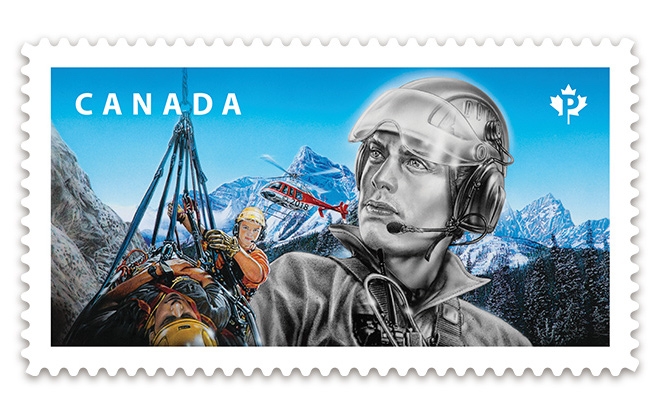 Canada Post each day this week is unveiling new stamps to pay tribute to the country’s emergency responders and search and rescue experts, highlighting “their willingness to spring into action with skill, determination and courage whenever called upon.”

Every year, millions of Canadians and visitors explore this country’s forests, mountains, waterways and oceans, explains Canada Post, while others work daily in remote conditions. The Crown corporation continues to explain search and rescue experts find, rescue and treat people in life threatening situations, and transport them to safety or advanced medical care as need be – “In performing their life-saving duties, search and rescue experts often find themselves in dangerous conditions such as avalanches, extreme weather or high seas.”

The third stamp of the series focusing on search and rescue was unveiled yesterday in Banff, Alta., at the centre for Parks Canada’s Mountain Safety Program. This stamp portrays a helicopter extraction in the mountains, while Canada Post notes a wide variety of search and rescue operations are also performed by many Canadian groups, including the Canadian Armed Forces and the Canadian Coast Guard, as well as volunteer organizations across the country.

The additional four emergency responders stamps pay tribute to paramedics, the Canadian Armed Forces, firefighters and police officers. All five stamps reflect Canadians’ respect and gratitude for the skills, service and sacrifices of those who protect Canadians, explains Canada Post, sometimes by risking their own lives.

The paramedics stamp was unveiled at the Ambulance New Brunswick headquarters in Fredericton, N.B. on Monday of this week, and a stamp honouring members of the Canadian Armed Forces was unveiled at Base Valcartier in Quebec on Tuesday. A stamp honouring firefighters will be revealed in Halifax, N.S. today, and a stamp paying tribute to police officers will be unveiled in Ottawa on Friday.