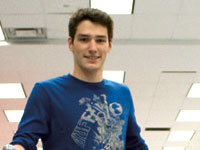 Quebec’s Simon Beauchamp has placed within the top five of the offset printing category after one day of competition at this year’s Worldskills, being held in Calgary this week.

Beauchamp is joined by Martin Ernst of Switzerland, Stefan Groß of Germany, Tsz-kin Liu of Hong Kong, and Amela Mujkic of the United States. Beauchamp is one of 52 Canadian competitors in this year’s WorldSkills Competition, representing a large variety of trades.

The other Canadians with the top five placements after the first day are: Marc-Olivier Bélanger of Quebec for Welding, Scott Blair of Ontario for Carpentry; Matthew Chadder of Alberta for IT PC/Network Support and Brian Everts of British Columbia for Aircraft Maintenance.

The WorldSkills Competition is a “means of exchange and comparison of world-class competency standards in the industrial trades and service sectors of the global economy.” Competition is held in all 45 categories each day and a panel of 15 report on the top five of each skill.

UPDATE SEPTEMBER 4 – Simon Beauchamp fared less well in the second day of competition where he, along with Switzerland competitor Martin Ernst, was replaced by representatives from Belgium and The Netherlands in the top five of the day.