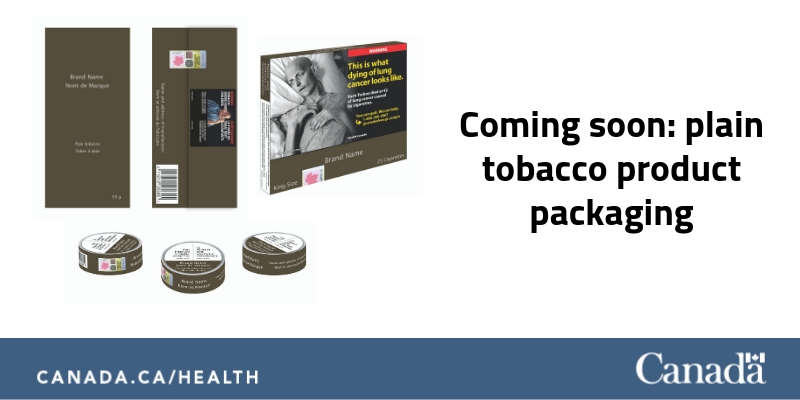 Cigarette packs sold in Canada will have to be plain drab brown with standardized layouts and lettering, starting this November. Minister of Health Ginette Petitpas Taylor last week announced new regulations for plain and standardized appearance of tobacco packages and products in a move to reduce their appeal to Canadians.

“These packages and products are powerful promotional vehicles. Reducing the appeal of tobacco products is an important step toward protecting Canadians, particularly youth, from inducements to using tobacco products and from the consequent dependence on them,” according to a statement from Health Canada.

Coming into effect November 9, the new plain packaging guidelines include removing “distinctive and attractive features” from packaging and products and requiring all packages to be of the “same drab brown colour.” Only the permitted text may be displayed on the packages, in a standard location, font, colour and size. Cigarette packaging will be standardized to a slide-and-shell format, and the appearance of cigarettes and other tobacco products will be standardized as well.

The new Tobacco Products Regulations (Plain and Standardized Appearance) are a key measure under Canada’s Tobacco Strategy, designed to protect Canadians from tobacco-related death and disease. Health Canada estimates more than 4 million Canadians still use tobacco — about 17 percent of the population – with the vast majority of smokers begin smoking by adolescence or young adulthood. The strategy aims to drive down tobacco use to 5 percent of the Canadian population by 2035.

“We have fulfilled our commitment to implement plain packaging requirements for tobacco products. The evidence is overwhelming that plain packaging is an effective way to drive down tobacco use, especially among young people. Reducing the rate of smoking among Canadians is a top priority for us,” says Petitpas Taylor.