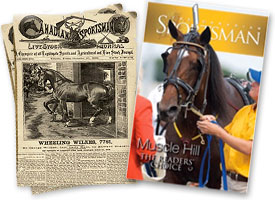 The Canadian Sportsman, the nation’s oldest magazine as recognized by the Library and Archives Canada, announced, that after 143 years of publishing, its December 2013 issue will be its last. The magazine covers harnessed horse racing in Canada.

“Several factors have led to this very difficult decision,” writes Canadian Sportsman President Gary Foerster in a statement. “Print magazines face unprecedented challenges in the digital age and the demographics served by the magazine pose their own unique challenges.”

The Canadian Sportsman published its first edition in 1870. According to Foerster, the publication suffered “dramatic losses,” after the Ontario Liberal government scrapped a Slots At Racetrack Program, leading to a big hit on horse breeders, the publication’s main source of advertising revenue. “The current Ontario government has announced some details of a plan designed to support racing on a vastly reduced scale. Regrettably, we do not envision a scenario whereby our publication can continue to exist.”

The magazine employs 27 people, either full time, contract or freelance. It has won 17 awards for editorial excellence in the past three years. Sportswood Printing, the magazine’s printing division established in 1989, will continue operating. Both the magazine and the printing operation are based in Straffordville, Ontario, roughly two hours southwest of Toronto.

“We owe a huge debt of gratitude to our advertisers and readers who have supported us for such a long time,” says Foerster. “People in the racing business are the best anyone will ever meet. It has truly been an honour to serve them through the pages of our historic magazine.”