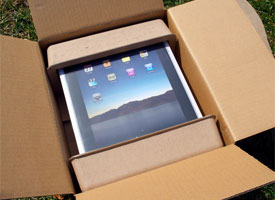 Apple has started taking preorders for the iPad in Canada and selected regions around the world. Canadian pricing for each device will be $50 more then its counterpart in the United States, despite the exchange rate standing at nearly par.

While the devices have been exported around the world via the grey market, Apple says the iPad will be in customers’ hands by May 28. In Canada, Rogers has so far been named as the sole provider of 3G data for the device. Like AT&T, Rogers will offer a 250 megabyte option for $15 a month, however, Canadians will not get the $30 unlimited plan – Rogers will instead offer a five gigabyte cap for $35. A previous announcement stating existing Rogers data users can tie the iPad to their plans has since been dismissed by the company, sparking criticism by potential buyers.

In Canada, the iPad ranges from $549 to $879 depending on storage capacity and 3G capability. In the United States since its launch in early April, the device has sold more than one million units.