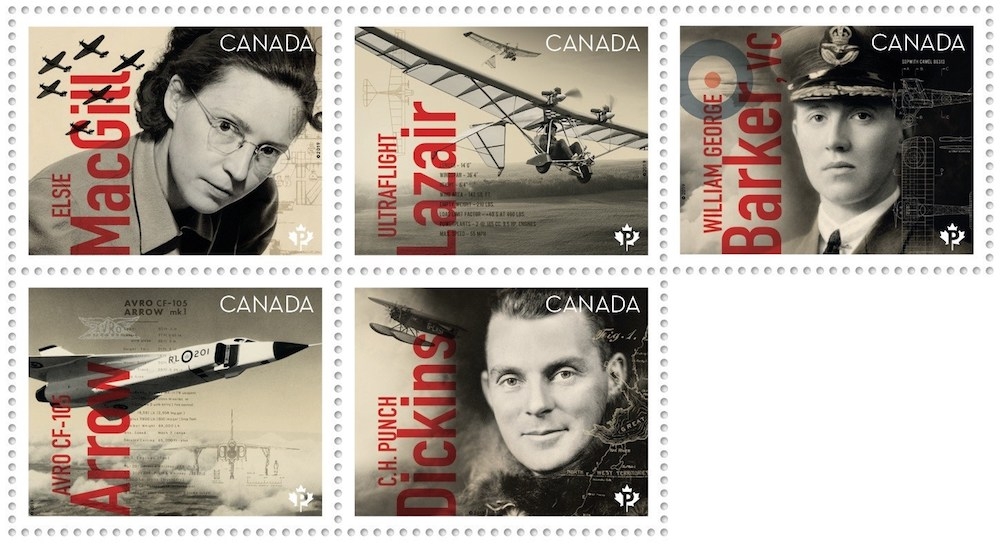 Canada Post today issued five stamps to honour Canadian pilots, designers and aircraft that made civilian and military aviation history. The stamp issue was developed with the support of the Canada Aviation and Space Museum – one of three museums under the Ingenium brand.

“As Canada’s storyteller, Canada Post is proud to share these stories of personal bravery and ingenuity, and to commemorate the aircraft that demonstrate Canadian technological innovation,” said Doug Ettinger, Canada Post president and CEO.

One of the five stamps commemorates First World War pilot William George Barker, VC, who remains the most decorated member of the military in the history of Canada and the British Empire. Barker flew more than 900 combat hours between 1916 and 1918 and is credited with 50 victories over enemy aircraft.

A mini-pane of Canada Post’s five newly issued Canadians in Flight stamps to celebrate aviation history in the country.

Elizabeth “Elsie” MacGill is also celebrated in the new stamp issue. She was the first woman in Canada to receive a degree in electrical engineering; and first in the world to hold a master’s degree in aeronautical engineering and to work as a professional aircraft designer. Canada Post explains she was dubbed Queen of the Hurricanes in a wartime comic book for her work in overseeing design refinements and production of Hawker Hurricanes. The fighter plane critical in the Second World War, and especially in the Battle of Britain.

The Lazair, a family of twin-engine, high-wing ultralight monoplanes designed by Dale Kramer of Port Colborne, Ontario, is also featured on one of the five new stamps. Manufactured as kits in Canada between 1979 and 1985, Canada Post explains the Lazair is still considered one of the best light aircraft ever made. Kramer received the Roméo Vachon Award in 1983 for outstanding contribution to the development of aeronautics in Canada.

Finally, the twin-engine, supersonic Avro CF-105 Arrow interceptor, which could fly at more than twice the speed of sound is commemorated in the stamp issue. Canada Post explains the CF-105 Arrow is considered one of the greatest technological achievements in Canadian aviation history. Some of its innovative technologies are still in use today.

“Ingenium is thrilled that our collection has helped to bring these ground-breaking moments in Canadian aviation to life,” said Christina Tessier, president and CEO of Ingenium, Canada’s Museums of Science and Innovation. “We hope that by sharing stories of those who dared to think differently, we inspire ingenuity, creativity and innovation in all Canadians.”

The stamp issue, designed by Ivan Novotny of Taylor|Sprules and printed by the Lowe-Martin Group, is available in a booklet of 10 (two of each design) and a gummed mini-pane of five. Five Official First Day Covers are also available as a set or separately.