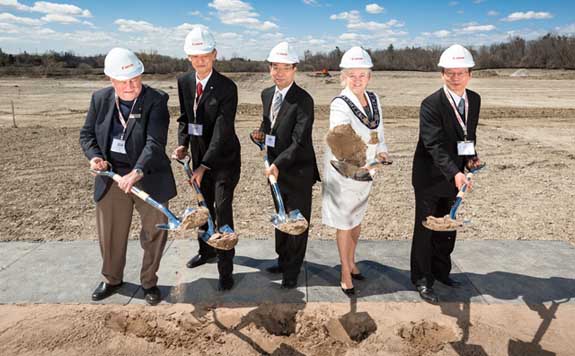 Japan’s Ambassador to Canada, the Consul-General of Japan and Brampton’s Mayor joined Canon Canada executives in a groundbreaking ceremony for a new five-story Canon headquarters to be built by December 2015.

“Our vision for Canon Canada’s headquarters goes beyond being an infrastructure investment or a building where our employees work,” stated Ted Egawa, President and CEO, Canon Canada Inc. “We want our new headquarters to become a community for our employees and for our customers, which aligns with our Kyosei philosophy, which means harmoniously living and working together for the common good.”

To be built on more than 18 acres at the corner of Mississauga Road and Steeles Avenue West in Brampton, Ontario, the new 180,000-square-foot headquarters will replace the company’s current office in Mississauga, which has been its home since 1984. Design of the Brampton facility is being led by the architectural firm of Moriyama & Teshima, which created the Ontario Science Centre in Toronto and The Canadian War Museum in Ottawa.

Canon is aiming to achieve Gold Certification under the Leadership in Energy and Environmental Design (LEED) rating system. Sustainable design elements planned include the incorporation of lots of natural light, energy-efficient equipment and collecting rainwater for reuse.

The Province of Ontario has designated Brampton as an urban growth area; by 2031 the city’s population is expected to grow to 725,000. Canon joins a list of high-profile organizations to build corporate infrastructure in Brampton, such as Loblaw Companies, HBC, Chrysler Canada, Rogers Communications, Maple Lodge Farms and Canadian Tire.

Parent company Canon Inc. of Tokyo generates close to $46 billion in global revenue and has ranked among the top four in U.S. patents registered since 1994.