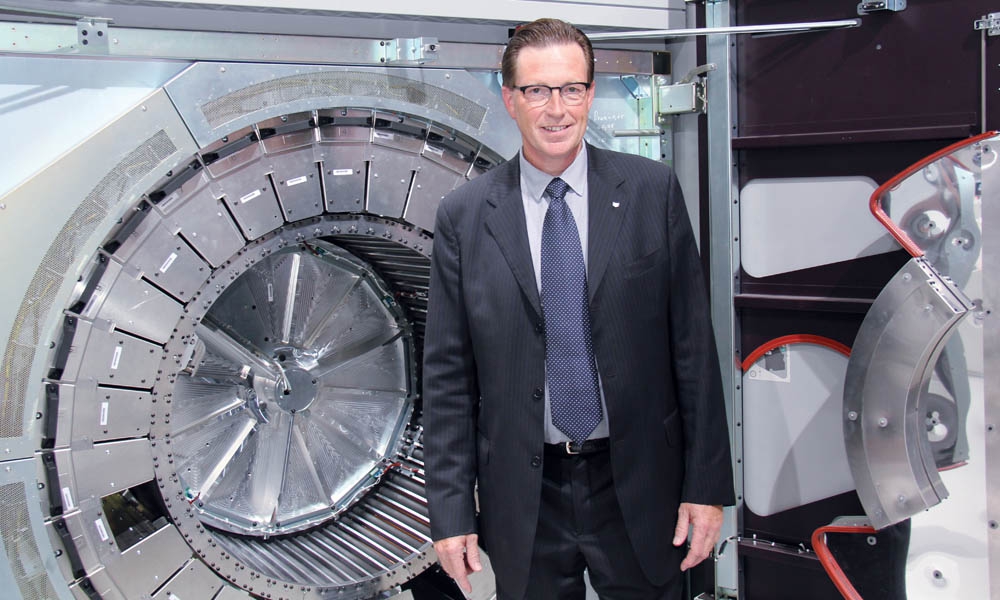 After a decade of intense research and development, supported by unprecedented technology partnerships, is production-strength inkjet finally ready to disrupt commercial printing?

The continued growth of inkjet printing systems was once again the major force at drupa, eight years removed from the cutting-edge system introductions of Fujifilm’s cutsheet Jet Press 720 and HP’s PageWide web press platform, which presented new possibilities to a sector largely dominated by the continuous-feed systems of Océ and Ricoh. At drupa 2012, another range of primarily concept production-inkjet machines were introduced by powerful players like KBA, Komori, Konica Minolta, Landa, Miyakoshi and Xerox.

At drupa 2016, all of these companies and many more had expanded their production-inkjet platforms with serious new players like EFI and Heidelberg joining the mix, setting sights on the packaging world. Several new technology partnerships between paper-transport experts (offset press makers) and print-head developers speak to a concerted effort to drive inkjet into the mainstream.

The past decade of inkjet R&D investment alone, collectively stretching into the tens of billions of dollars, by so many prominent technology suppliers rings the loudest chorus of reality – inkjet is building a new foundation for the future of printing. Still, the question remains with most printing companies for when inkjet systems, even with an ability to match 40-inch format size (unlike toner’s electrophotographic drum), will be ready for prime time in the commercial printing market. Key issues like quality and speed, press and consumable costs, have been a major challenge for the mass adoption of inkjet, even as this fascinating printing process has been disrupting pockets of publishing, transactional and direct-mail printing.

“We were forerunners at that time, but it was far from being fast enough and you had to be in a highly controlled environment,” recalls Couckuyt, who was also integrating inkjet print heads on web presses at Yorkville. “Twenty years later, look at how far we have come… you can feed [an inkjet press] with so much data and the output is so cost efficient. The sky is the limit and this is an exciting time.”

Prior to his digital-printing work with Yorkville, Couckuyt began his career in 1983 as a Product Manager for Agfa Canada, ultimately serving as the company’s Vice President of Graphics Arts Systems for 10 years until joining Transcontinental in 1996. Today, as Senior Director of Canon Canada’s Professional Printing Solutions Group, he holds a unique knowledge set to describe the adoption of production-inkjet systems in Canadian commercial printing.

“We are targeting commercial printers right now with the experience that we have acquired in the transaction market, combined with the quality levels that inkjet has reached, when you talk about the VarioPrint i300 and the ImageStream, as well as the capabilities of printing on coated offset stock,” says Couckuyt. He joined Océ in 2008, as Vice President of Production Printing Systems, shortly before the company (purchased by Canon in 2012 for approximately $1 billion) installed one of Canada’s first web-fed production inkjet systems.

“We have more than eight years of experience with a similar technology that has evolved to a point where it is now ready for prime time in commercial printing,” he says. “You always have to take into account the volume, the production capabilities of equipment, and I think there is bigger potential for cutsheet inkjet devices in the Canadian market, more so than continuous-feed inkjet.”

Near the back of Canon’s drupa 2016 booth, the company ran a new web-fed ImageStream inkjet press, which is a class of technology Couckuyt feels some commercial printers will look at depending on their needs. “It is the same technology,” he says, relating the VarioPrint i300 to the ImageStream platform. “You are using 1,200 x 1200 native inkjet heads, combined with smaller droplets, different types of inks, coated stocks, proper drying systems, and now you are playing into the commercial printing field.”

Web-fed inkjet, traditionally referred to as continuous-feed systems, has a significant existing install base because its paper transport naturally runs substrates much cleaner through the imaging system, whereas a turned-up ear can easily jam a cutsheet press. This cutsheet inkjet challenge is being addressed, however, as offset press makers become heavily involved with inkjet development. Despite the experience advantages of web-fed systems, Couckuyt points to the business realities of Canadian commercial printing, which for decades has been built around cutsheet workflow. “It would only be a logical step to also add an inkjet cutsheet device,” he says. “Basically, it offers quite a bit of additional application opportunities to the commercial printer.”

Downtime becomes uptime
“When you run an offset press, you are always making sure that you have the least downtime possible, which must be minuscule when you look at your total production time,” says Couckuyt. “In digital printing, people talk about uptime – just the opposite. If they had 50 to 60 percent uptime [on toner] they were happy, but that doesn’t cut it for an offset printer.”

Canon’s cutsheet VarioPrint i300 system is promoted as having an uptime of more than 90 percent, often approaching 95 percent: “Now you are talking about a production machine – in addition to the quality and capabilities of printing on multiple papers – that fits right into the offset world,” says Couckuyt. “Those factors are extremely critical and the reasons why we believe it is ready for the commercial printer.”

To improve cutsheet inkjet uptime, for example, the VarioPrint i300 is a self-contained system, meaning it is temperature and humidity controlled, and all external elements have been eliminated (a noticeable trait looking at the body of the machine). Even the input trays of the i300 are sealed for temperature control. The unit has to be decompressed when opening up its doors. With its doors open, the first thing you notice about the i300 is a massive drying system. Canon engineers ultimately surmised a sheet needed to travel in the drying system for two seconds at full running speed to properly condition the paper – hitting it with infrared, conventional heat and air systems – before reentering the duplex imaging system.

Couckuyt explains this unique drying system is critical because operators do not need to slow down the i300 when applying heavy ink coverage. “It is actually a production machine and it is built in such a way that even if you have high coverage you will not slow down the press,” he says. To further improve uptime, the i300 employs a Sentry Unit that ejects wavy, earmarked or unwanted papers, again at speed, before first entering the imaging system. “A jam in digital printing on a cutsheet device is always your biggest nightmare.”

Quality applications
Commercially released more than a year ago, there were 42 i300 systems installed globally before the opening of drupa 2016, which actually marked the system’s availability in the Canadian market. A key new feature of the i300 introduced at drupa is called ColorGrip, which applies a primer specifically where expensive inkjet ink needs to go, instead of blanketing the sheet.

A critical goal for all inkjet system developers, particularly for commercial printing adoption, is to improve their inks to a level that can more easily adhere to both coated and uncoated papers without the need for applying a primer. This will take time, but systems like ColorGrip, which actually immobilizes the ink to stop it from convalescing into big, ugly dots, are providing a vastly superior level of quality output than older generation inkjet systems. “ColorGrip keeps the right colour in the right position,” says Couckuyt, “so you are basically extenuating and giving more pop to your colour – Even a good sheet, you make a lot better.”

One of the greatest advantages of digitized sheetfed offset presses, and why the technology remains core to the vast majority of printers, is application flexibility – an ability to throw almost any commercial print job at it, regardless of ink coverage, stock or format. For a printer to invest more than a $1 million into an inkjet press, even if today’s systems can handle a greater range of work, it becomes critical to understand the production cost of specific applications.

“With the VarioPrint i300, where it becomes viable for a commercial printer to enter into that field, you are looking at a million and up impressions per month – all the way up to 10 million,” says Couckuyt, explaining a typical web-fed system requires at least five million impressions to become a viable investment.

“We spend an extreme amount of time with the customer before a sale takes place,” says Couckuyt. Canon will run a job file from a printer’s existing offset infrastructure at its Océ facility in Boca Raton, Florida. “We will make a complete analysis of the files, ink consumption, press time, everything, so that the client really knows in advance what they are embarking on.”