After weeks of acquisition disruption by a group of Océ shareholders, Canon Inc.’s Board of Directors, including Chairman Fujio Mitarai and President Tsuneji Uchida, today declared that the company’s approximate US$1.1 billion offer is unconditional. 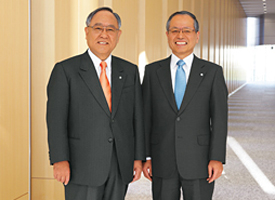 Canon originally made a €730 million offer to purchase Océ back in November 2009, at the time stating the offer must reach an 85 percent acceptance from Océ shareholders for the acquisition to be unconditional. But in mid-January 2010, Bloomberg news reported that the deal might be in jeopardy “after holders of 13 percent of the Dutch company said they won’t tender their shares and a group representing about 200 investors said the offer was too low.”

Bloomberg’s January 13 article also pointed out that the deal was fully supported by Océ executives and that, at the time, there were no counter bids on the table, while financial analysts pointed out that it was not vital for Canon to obtain 100 percent of Océ’s shares.

Today, Canon’s board announced it is satisfied with its 71 percent of shares, despite being well short of its previously announced 85 percent threshold, and that Canon intends to buy all remaining shares on an unconditional basis.

As a result, it is likely that the disgruntled shareholders, whose lawsuit was rejected yesterday by a Dutch court, will have no choice but to accept the deal. A report today by Reuters quotes analyst Jos Versteeg of Theodoor Gilissen, saying, “It’s a done deal now.”