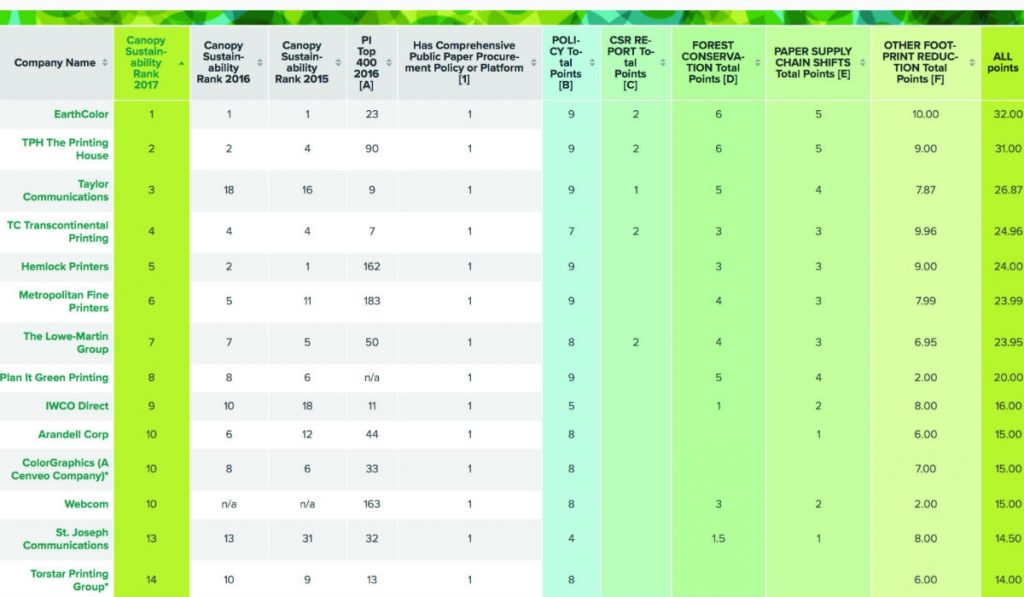 Six of the Top 10 printing companies on the 2017 Blueline Ranking are from Canada, with St. Joseph and Torstar Printing Group also making the Top 15.

Profiling and ranking the environmental performance of North American printers

The 2017 edition of Canopy’s Blueline Ranking was released in July, and while this year’s results are consistent with the trends of the past two years, they also show some interesting and surprising new results.

The top three ranking printers this year are, in order, EarthColor, The Printing House, and brand new to the Top 10, Taylor Communications. Taylor also wins the title of the fastest rising printer of 2017, moving up 15 spots from 18th place last year. It achieved this major jump through strong sourcing policy updates, and solid work on implementation.

Overall, Canadian printers are leading their peers to the south in sustainable print practices, with six of the Top 10 printers being Canadian-owned. This is in part a response to customer demand within Canada, but also very likely due to Canopy’s long relationships with the Canadian print and publishing sectors.  The Printing House, TC Transcontinental, Hemlock Printers, MET Fine Printers, The Lowe-Martin Group and Webcom, all made the Top 10. The Blueline Ranking rates major printers on a set of 32 key sustainability criteria and highlights sector leaders to consumer brands.

Printers that top the ranking are outperforming their peers in areas such as:
• Having a industry-leading eco-paper policy;
• Reducing their use of papers that contain ancient and endangered forest fiber;
• Supporting the advancement of forest conservation solutions in places such as Canada’s Boreal forest, North America’s temperate rainforests, the Amazon, and Indonesia’s rainforests;
• Actively supporting development of new environmental papers such as those made with high recycled content or agricultural fibres such as wheat straw; and
• Transparently reporting their sustainability initiatives progress and implementation.

Printers increasingly understand that to help their customers meet their own sustainability goals (and gain or maintain their business), they have to align with the ambitious environmental goals that brands themselves are setting, as well as provide brands with as much information as possible on their own environmental policies and sourcing efforts.

As a result, we have seen two significant shifts in this year’s Blueline Ranking:
1. There is a definitive move by printers towards adopting more rigorous sustainability policies (as noted with Taylor Communications already, but not isolated to them); and
2. Printers are communicating more transparently on their sustainability practices.

In fact, in three short years, the Blueline Ranking has become a mini phenomenon among environmentally engaged printers, who work hard to meet their sustainable sourcing goals, achieve transparency in their supply chains, and effectively communicate their efforts on these fronts. It’s also become a go-to tool for many North American print customers. Scholastic’s Senior Director of Paper Procurement, Lisa Serra, notes, “As a publisher and distributor of children’s books, Scholastic is committed to the pursuit of environmentally friendly practices and to leading by example. We’re pleased to recommend Canopy’s Blueline Ranking as an invaluable tool for any print customer who shares our goals and wants to reduce their impact on the world’s ancient and endangered forests.”

It is this footprint of most conventional papers that necessitates the need for the development of lower carbon paper and packaging options such as papers made with high-recycled content or straw fibre. Printers have an important role to play in encouraging paper mills to develop these next generation papers as well as support their commercialization by stocking them as house papers.

Print customers have their own CSR goals to achieve, and strong policies and transparency among North America’s largest printers helps them more achieve them more easily.