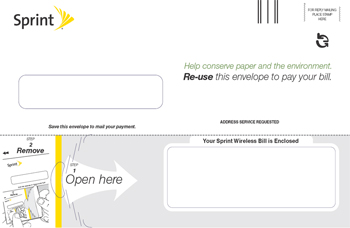 With assistance from Vancouver’s Canopy, a not-for-profit organization dedicated to the corporate implementation of progressive paper policies, Sprint set a goal to increase its use of recycled content to 25 percent by 2017, while also supporting the development of alternative paper-fibre sources, such as residue from agricultural crops, and reduce its use of paper with toxic chlorine bleaching.

One of Sprint’s more aggressive environmental goals is to have at least 50 percent of its print suppliers comply with its environmental and social criteria by the end 2012, and at least 90 percent to comply by year-end 2017. Sprint’s new paper policy also includes commitments to pursue supplier assessments with Canopy using chain-of-custody forms to ensure its paper products do not come from endangered forests and other controversial sources.

“Sprint is already well-known as an environmental leader among the Fortune 100, and recent updates to their Paper & Print Procurement Policy further distinguishes the company from its competitors in this area,” said Amanda Carr, Campaigns Director, Canopy. “And today they have acted on that policy with this major step in reducing their paper use.”

Sprint’s new commitment to the two-in-one ecoEnvelope, developed by a women-owned company in Minnesota, allows customers to receive and remit payment using the same envelope. In just over a year, Sprint estimates the new envelope format will save close to a half million dollars in operational costs and – using the Environmental Paper Network Paper Calculator – the equivalent of 447 tons of paper, 1,669 tons of wood (11,565 trees), 9,931,834 gallons of water (15 Olympic-sized swimming pools), 859,047 pounds of solid waste (31 loaded garbage trucks), and 2,692,185 pounds of CO2e (244 cars off the road per year).

“Sprint is the first wireless carrier and only one of a few select retailers to offer the ecoEnvelope to their customers,” said Scott Rice, VP of Sprint’s Care and Billing Services. “While more than 30 percent of Sprint accounts currently use a paperless billing option, many customers prefer to receive a paper invoice. The new bill format not only gives our customers a convenient method to remit payment but it will reduce paper waste, conserve natural resources, and lower paper consumption for Sprint.”

Last year, Sprint’s environmental paper policies were recognized by Forest Ethics, which awarded the company an “A” on its 2011 report card – making Sprint the only Fortune 500 company to receive such a high grade. Newsweek magazine ranked Sprint No. 3 in its 2011 Green Rankings of companies in the United States.