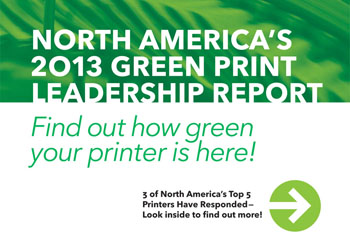 The report, referred to by Canopy as a first of its kind for North America, profiles printing companies that are leaders in paper procurement, forest conservation and sustainability reporting. It includes some of the industry’s best-known operations like TC Transcontinental, R.R. Donnelley, Sandy Alexander, and BC-based Hemlock Printers.

“We’ve been very pleased by the response to Canopy’s survey and especially with the growing number of printers showing an increasing level of conservation leadership,” said Marcus Ginder, Print Campaigner with Canopy. “The companies we work with are looking beyond tri-certification to support printing firms that take an active role in advancing endangered forest conservation.”

The Green Printer Leadership Report will be circulated to executives of large print buyers like Random House, Time, Scholastic, as well as Canopy’s 700-plus signatory companies and those with a stated interest in forest conservation.

Thirty-six printing firms, accounting for a total of 250 North American plants, participated in Canopy’s survey portion of the report. Neva Murtha, Canopy Print Campaigner, points out that while 92 percent of the respondents have sustainability policies only 42 percent of those are publicly available.

“Printers play a key role and can make a significant contribution to protecting the world’s remaining forests,” said Murtha. “Canopy is committed to collaborating with printers to do just that, by working with them on strong forest conservation policy development, implementation and transparent reporting.”

The full PDF report can be downloaded from canopyplanet.org.