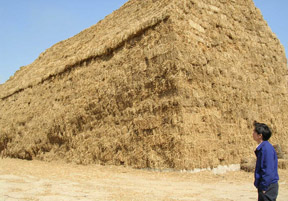 Eco-paper experts from Canopy are reaching out to Canada’s printing public with the launch of an online survey to assess the North American market interest for papers made from agricultural residues.

“This study is the first of its kind in North America. Up until now, information about the market viability of non-wood paper has been anecdotal,” says Neva Murtha, Second Harvest Campaigner with Canopy, a non-profit based in Vancouver that focuses on environmental paper supply. “When done, we’ll be able to translate demands for eco-paper into initiatives that help make straw papers a North American reality.”

Last year, Canopy worked with Ottawa-based Dollco Printing in a successful trial to produce Canadian Geographic magazine on an agricultural-residue paper, called the Wheat Sheet. The project marked a North American first, which Canopy claims to have raised much interest from “large paper consumers,” despite the lack of North American supply in agricultural-residue-based paper.

Canopy’s survey is designed to help the organization identify new and emerging opportunities for environmental paper development. Data collection for the study, around issues like tonnage demand and priority grades, is to target publishers, printers and office retailers.