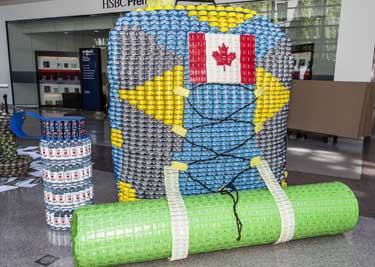 Canstruction Vancouver, a charitable program founded by MET Fine Printers 12 years ago, announced its award-winning companies from the 19 sculptures created, which brought in donations of more than 65,000 cans of food.

Canstruction Vancouver is a juried design and build competition where teams of architects, engineers, graphic designers, schools and corporate teams compete to create sculptures out of full cans of food. This year’s 19 teams involved the work of over 225 builders, focused on the competition’s theme of “Around the World.”

After two days of building, the sculptures were put on public display at three Vancouver venues, including: the Pendulum Gallery, Rotunda at Pacific Centre, and Four Seasons Hotel in the heart of downtown.

Winners of the National Awards will compete against more than 130 cities from around the world in the International Canstruction Competition later this year.

Best Meal
World is Your Oyster by Ausenco

CAN-do Award
House from “UP” by Simon Fraser University