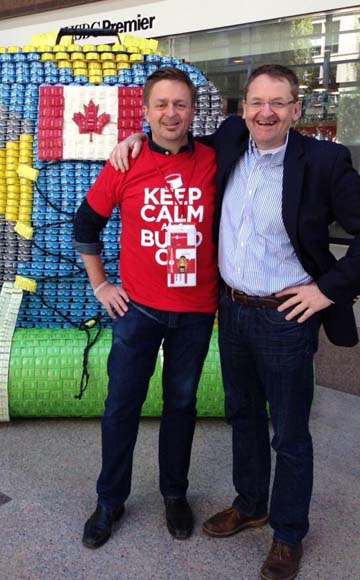 Canstruction Vancouver, an annual non-profit competition founded by MET Fine Printers, to build sculptures out of food cans, which are then donated to the Greater Vancouver Food Bank Society, remains open to the public until May 16.

After two days of building, from May 9 to 11, the sculptures go on display to the public for free at three Vancouver venues, including: the Pendulum Gallery, Rotunda at Pacific Centre, and Four Seasons Hotel in the heart of downtown.

“Inspired by our theme Around the World, we will have astronauts, airplanes, ships, postcards, spiritual moons and travelling gnomes on display,” said Scott Gray, Chair of Canstruction Vancouver.

Now in its 12th year, the 2014 competition features 19 food-can sculptures of approximately 10 x 10 x 8 feet. Organizers estimate the sculptures when combined are comprised of more than 65,000 cans. Judging in the competition begins today.

Canstruction Vancouver is the local chapter of Canstruction, a global anti-hunger project, a trademarked event that has been held in over 140 cities worldwide. Since 1992, Canstruction has contributed over 17.5 million pounds of food to community food banks. The Greater Vancouver Food Bank Society provides assistance to over 28,000 people weekly through 15 food depots and over 100 community agencies located in Vancouver, Burnaby, New Westminster and North Vancouver.