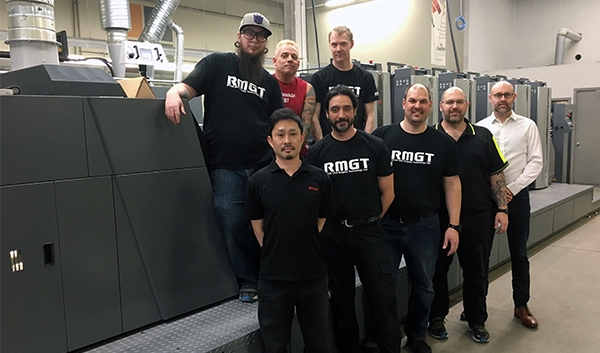 “We are the epitome of a commercial printer,” said Brian Todd, President of Capital Colour. “Most of the work we’re doing is marketing materials – magazines, booklets, brochures, flyers, etcetera – and probably 85 percent of our work is 4-color process.”

“We have literally taken a job off the press and immediately started cutting and putting it into bindery,” said Tood. “Normally we would have had to wait half a day – or even overnight – to touch those jobs.”

Todd explains the company’s search for a new press was focused on acquired a mid-sized machine, initially preferring to stay away from a full size 40-inch market. “We’ve been a successful mid-size sheet printer since day one, but this press was very unique,” said Todd, speaking of the new RMGT 9 Series press, which allows the shop to compete on most of the work that would usually require a 40-inch press, without actually having to invest the money or the space in such equipment.

Capital Colour, with the goal of opening up more markets, will continue testing and running non-traditional substrates like synthetics and plastics through the RMGT 9 Series press. “We’re focused on meeting our customer needs, and we will continue to invest and readjust to remain a viable business going forward,” Todd said.

Founded in 1979 as a small graphic design and prepress shop, Capital Colour originally did not have a single press of their own. Fred Neuschmid, the company’s founder did however have a background in printing, and when he saw that the days of dedicated prepress service bureaus were nearing its end, purchased the company’s first press. Seven years ago, Neuschmid was ready to retire, and Todd, who actually started with the company nearly 20 years ago as an account representative, and his wife Bonnie Todd, made the decision to invest. “I had too much care and respect for the team to see it go to an outsider,” he said.