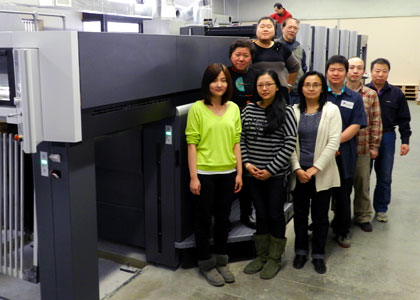 CCT Printing is celebrating its 25th anniversary this year. “We celebrated our 25th anniversary as our busiest and most exciting year,” stated Tracy Ma, who purchased the company in 1995, seven years after it was founded as a typesetting operation (CCT stands for Chinese Computer Typesetting Centre).

Ma moved into sheetfed-offset production in 1998 and six years later purchased CCT’s first 4-colour press from Heidelberg, a Printmaster PM74-4. Two years after that, she then expanded with a Speedmaster SM-74-5P+L.

The company’s recent Speedmaster CD 102 installation, which includes automatic colour control and Preset Plus Delivery, is capable of running 28 x 40-inch sheets at 15,000 impressions per hour. The latest sheetfed-press installation was necessary, according to CCT, because the company has doubled its orders and sales volume over the past two years. In the first four months of production, CTT claims the CD 102 press has produced over 10,000,000 impressions.

“We pride ourselves on quality and service to our customers. Our customers are very happy because they know we will deliver on time,” stated Ma. “If I promise a job for tomorrow, I am not going home until it is done.”

CCT Printing currently has 20 employees working full time. Holding on to its roots, the company continues to specialize in its ability to work with both simplified and traditional Chinese characters for a variety of multicultural businesses in the Greater Toronto Area market, across Ontario and into some Western Canadian provinces. The operation primarily produces menus, flyers and news bulletins in a variety of languages, while also offering UV flatbed production, saddle-stitching, hot lamination and wire-ring binding.