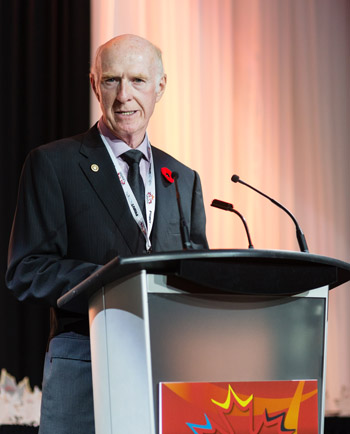 The evening began by recognizing the influence of Carl Pauptit with the John A. Young Lifetime Achievement Award. Pauptit founded Etobicoke’s Flash Reproductions 45 years ago and continued to drive commercial-printing excellence into the Toronto market, as the industry made huge transformations from letterpress to offset litho to digital prepress. Pauptit retired in 2009 when his son, Rich Pauptit, became President of the company.

PrintAction’s second Industry Achievement Award was presented to Don Gain as the Printing Community Leader of the Year. Gain, President of Harmony Printing, was primarily recognized for his work with the Canadian Printing Industries Scholarship Trust Fund (CPISTF). He has been on the board of CPISTF for 12 years and served as its Chair for the last nine years.

In its most recent year, CPISTF awarded $52,500 in scholarships across Canada to post-secondary printing students. CPISTF was initiated in 1971 and has since generated over a $1 million in funding. Gain was also instrumental in establishing the dedicated downtown Toronto building for Ryerson University’s Graphic Communications Management (GCM) program, for which he continues to serve on the Advisory Board. 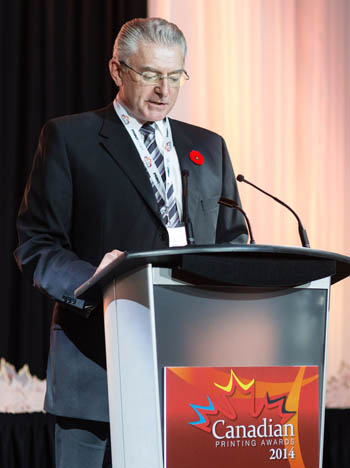 Nikos Kallas, age 34, received PrintAction’s Emerging Leader of the Year Award. He became President of Vancouver’s MET Fine Printers in January 2011, succeeding his father, George, who founded the company in 1977. Nikos Kallas, who previously served as MET’s Business Development Manager, has lead key new initiatives such as MET Resources, to push the company beyond its world-class lithography, as well as MET FX research and development. He sits on an advisory board for the British Columbia Institute of Technology’s graphic communications program and plays a key role in MET’s carbon-neutral production and important community initiatives like CANstruction Vancouver.

The 2014 Printing Industry leader of the Year Award was presented to Peter Cober, President of Cober Evolving Solutions (CES) in Kitchener, Ontario. In late-2013, CES installed Canada’s first HP Indigo 10000 press; and just a few of weeks ago, the country’s first Indigo 7800. Upwards of 90 percent of work reaching the HP Indigos is driven through Web-to-print portals.

In 2012, Cober Evolving Solutions, after a branding transition away from its historic 1916 Cober Printing name, moved into a new 86,000-square-foot facility in Kitchener, home to more than 120 employees. In February 2014, Cober continued its expansion with the purchase of Kempenfelt Graphics and in January 2014 added a five-year-old design agency called CuteGecko primarily because of its expertise in social-media. 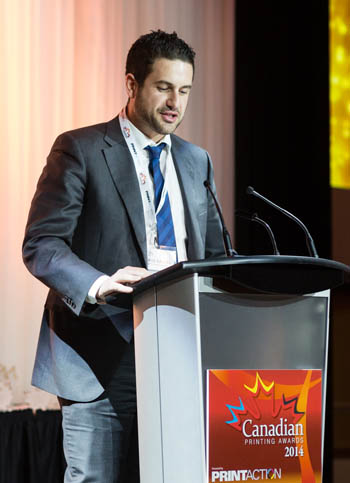 The Most Environmentally Progressive Printing Company awards, on which the Canadian Printing Awards program was founded, went to: Gold, Hemlock Printers of Burnaby, BC; Silver, The Lowe-Martin Group of Ottawa, ON; and Bronze, Symcor ISS of Mississauga, ON.

The Canadian Printing Awards gala concluded by presenting the Best of Show Award to The Lowe-Martin Group for its production of Canada Post’s Haunted Canada Stamp Booklet (400,000 produced). This project was chosen from more than 230 entries, which vied for Gold, Silver and Bronze Awards in the program’s Quality Printing categories. Below are the Gold Award winners (a complete list will be provided in the January 2015 issue of PrintAction magazine): 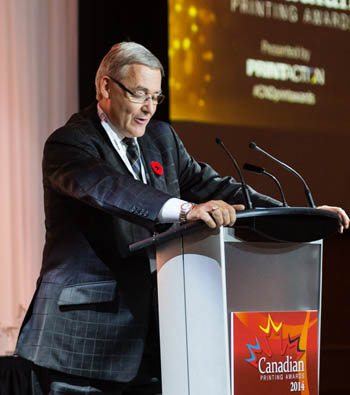