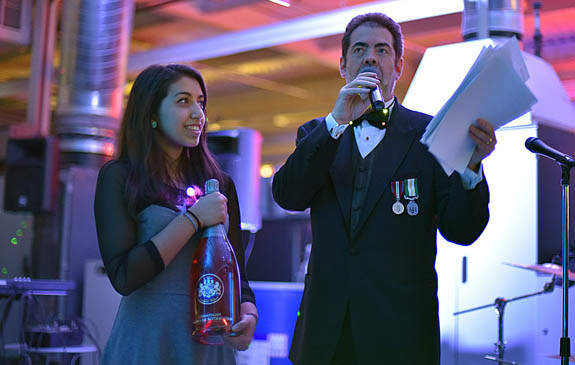 C.J. Group also emphasized its recent new partnerships with Gilda’s Club of Toronto, Ontario Parents Advocating for Children with Cancer (OPACC) and Childhood Cancer of Canada, in addition to an expansion of its skateboard park and Kids Being Kids program. The skateboard park is a not-for-profit facility offering year-round supervised skateboarding, scooter riding, inline skating, as well as lessons, camps and classes, to all kids in the community, including those with special needs.

More than 1,000 people attended the December 5th event, which included both live and silent fundraising auctions. Thirteen items were picked up at the Live Auction, led by Jay Mandarino, President of C.J. Group, while 90 were available to bid on during the Silent Auction. In total, $21,865 was raised for the C.J. Skateboard Park & School – an increase from last year’s event. Volunteers were on hand from the Daily Bread Food Bank, who collected donations of both $1,600 and 1,700 pounds of food.

New highlights of this season’s event were stations for Chinese Calligraphy, where attendees could have their name transcribed into Chinese, a Photo Booth to dress up in your favorite superhero costume, and Woody’s Burgers. Continuing stations included an oyster boat, beer and wine bars, sushi station, desert station, pulled pork station, pizza station, sandwich station, smoothies, Cheese station and more. The evening featured a live DJ and an appearance by songwriter and performer Shy.

In addition to C.J. Group, the event was sponsored by CIBC, Sony Playstation, Maple Lodge Farms, Gatorade and Pizza Pizza.