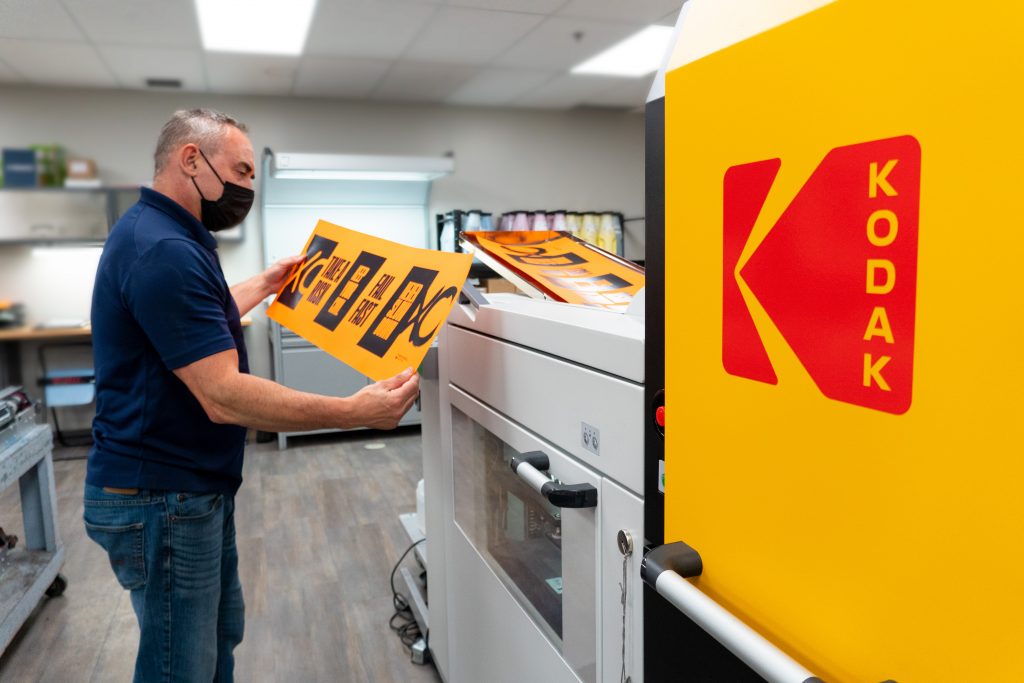 Mark Butler, supervisor of the digital division of Mitchell Press.

It’s not easy for a new piece of equipment to impress someone who has been working with printing machinery of all types since the mid-1980s. When veteran operator Mark Butler of Mitchell Press says that he, customers, and even the manufacturer have been “blown away” by the quality and performance of the company’s recently installed Nexfinity Digital Press from Kodak, his reasons for bestowing that high praise are worth looking into.

Butler is digital division supervisor at Mitchell Press, a print-based marketing company that has been doing business in Burnaby, B.C., since 1928. In May 2021, Mitchell was among the first sites in North America to beta-test what Butler describes as one of Nexfinity Press’s most value-adding features: its ability to move opaque white from the fifth to the second imaging station of the five-colour, dry-toner EP sheetfed press.

Opaque white is one of numerous specialty dry inks that are normally dispensed from the Nexfinity Press fifth station, which can also create gold, clear, dimensional, fluorescent, and security effects. In some jobs, however, white is used to best effect when it is laid down ahead of the process colours – a printing sequence that broadens the range of applications the Nexfinity Press can produce.

“One of the biggest applications we’re using it for is when a customer wants to print on a coloured stock,” says Butler. “Before the Nexfinity Press, if you had a red emblem that is your logo, and you wanted to print it on a nice, dark blue stock, you couldn’t do it. It would just look dark – you wouldn’t get any colour from it.”

However, by swapping white into the second unit, Butler explains, “you’re basically using the white as paper. Now you are free to put down any colour on top of that, and it works really well.”

In one such job, the customer wanted to present an environmentally sensitive look by using 100 per cent recycled paper: a rich blue stock for the interior pages, and brown Kraft for the cover. With white laid down as a base for the CMY, says Butler, “you can get the beauty of that natural paper, but still keep your branding intact.”

Swapping white into the second station “works flawlessly,” according to Butler. Thanks to the high opacity of the white ink and the precision of the Nexfinity Press registration, “one pass through the press looks excellent, and there’s very little waste to it.”

Other potential uses for second-station opaque white at Mitchell are labels, transparencies, and short-run packaging. “The beauty of the Nexfinity Press is the gamut of things you can do with this press compared to other digital presses,” Butler notes. “The applications are endless when it comes to different things people can try with it.”

This makes the Nexfinity Press a suitable solution for Mitchell’s digital division, which Butler calls “quite boutique and niche” in the products it offers and the G7 Master printing standards it upholds. “A lot of our jobs are higher quality to the point of being ridiculous quality,” he observes. “When I’ve had Kodak come here and see what we print, they’re blown away with what the press can produce – way beyond even what they thought.”

Butler says that compared with other digital presses, “the quality of the Nexfinity Press is like night and day. And it can do that even when printing hundreds of thousands of impressions. We’ll do 900,000 to a million in a month, and the press still performs. We’re printing 50,000 impressions every seven hours, and the press does it with no problem. It will just run, and run, and run” at production speeds up to 140 A4 pages per minute.

The Nexfinity Press has also created business opportunities. Butler says that in tandem with Mitchell’s high-volume offset web capacity, “having a digital division has given us a gamut so that when a customer comes to us, it doesn’t matter whether they need 50 books, or 500,000 books; we can do it.”

“As a business, we now have that window where customers can come to us, and we have a price structure where we can do it on the Nexfinity Press, and it fiscally makes sense,” Butler says. It also enables the production of high-volume hybrid jobs such as a real estate catalog with interior pages printed by heatset web offset and covers printed variably on the Nexfinity Press, in a total run of 150,000.

Continuously adapting to changing markets and acquiring the capabilities needed to serve them have brought Mitchell Press to within just a handful of years of celebrating its 100th anniversary, a milestone that few printing companies ever reach.

“Working with Kodak has really helped,” Butler declares. “What’s great about them as a company is that they’re always bringing updates for the press, like moving white into the second unit. We’re finding them very progressive. They don’t stand still. They’re always trying new things. Their people are brilliant. They have fantastic people, and we have fantastic people here. And I think that’s why we succeed.”